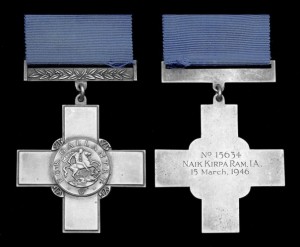 Shimla: With Indian investigating agencies having issued an Interpol questionnaire about the rightful ownership of a contentious George Cross Medal, the auction for which was called off by a London auction house in December 2009, a video has surfaced on YouTube claiming the medal was sold by owner Brahmi Devi and not stolen.

Swedish national Ashok Nath, the current owner of the medal, says that he is being harassed by Indian authorities and has sought an impartial inquiry preferably by Scotland Yard or CBI.

Giving out details about the acquisition of the George Cross Medal that was posthumously given to Naik Kirpa Ram of the Frontier Force Rifles widow Brahmi Devi in 1945, Nath in a blog post states that the medal was bought by him for Rs 3.5 lakhs from curio dealer SL Jain in Delhi in August 2000 whereas a theft complaint is recorded only in February 2002.

As evidence of Jain having acquired the gallantry award through fair means, Nath says he was shown a video along with affidavits of Brahmi Devi gifting the medal to one Kirpal Singh, who in turn sold it to Jain.

A copy of the video, which Nath recovered recently, was handed over to Scotland Yard. Footage of the video has also surfaced on YouTube.

In the footage Kirpal Singh along with others, including some who are residents of the village is seen at the house of Brahmi Devi in Bilaspur, who is seen displaying the George Cross Medal.

Nath says that neither does he know Kirpal Singh nor Brahmi Devi and is the third person to acquire the medal after the owner gifted it. He adds that he was being made a scapegoat by Himachal police officials who want to seize the medal from him without even paying for it.

â€œWe did receive a copy of video from Scotland Yard in June and it is inconclusive proof about any sale or gift,â€ says N Venugopal, DIG (Deputy Inspector General) Himachal police who is the investigating officer in the case.

He said that investigations were going on and they were awaiting a response to an Interpol questionnaire issued in the case. Dismissing allegations about any harassment, Venugopal say, â€œour police cannot question someone who is not an Indian Citizen.â€

Daljit Manhas, Director General Police, Himachal (DGP) adds, â€œthe lady (Brahmi) is illiterate and the video has been made in such a manner as to give an impression that a sale was being made.â€

Dix Noonan Webb, a London based auction house, after putting out an estimated price of 20,000 – 25,000 pounds had withdrawn auction of the medal that was go under the hammer on 2nd December, 2009.

The issue had figured in parliament and Himachal High Court taking cognizance of reports that the medal up for auction was stolen and not gifted or sold had asked investigation authorities to make efforts to recover it.

Widowed at 13, Brahmi Devi had received the medal from Field Marshal Lord Wavell, Viceroy of India on January, 1946. She has been maintaining that she did not sell the medal or gift it to anyone, and has sought state help to recover it.

The George Cross was awarded to Naik Kirpa Ram posthumously for having picked up a live grenade which exploded on him on 12th November, 1945, leaving him fatally injured but managed to save the rest of the section that he was commanding.