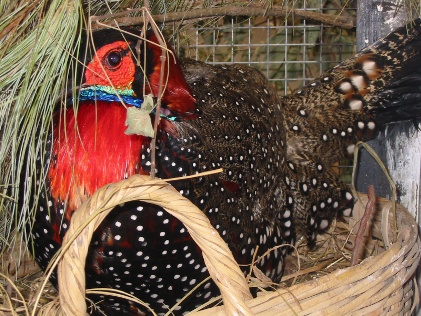 Shimla: After spending crores of rupees on conservation breeding of Western Tragopan, a highly endangered Western Himalayan pheasant facing extinction, the program is but an apparent failure that the wild life officials and an overseas consultant refuse to acknowledge.

Reliable sources revealed that in March-April, 2010 nearly all of the 23 Western Tragopanâ€™s in captivity at the specially made Saharan breeding center in Shimla district had bacterial infection and were being treated.

The surviving birds laid 17 fertilized eggs of which only one hatched and that too the chick died within a week. Post-mortem findings of the dead birds including the chick has revealed bacterial (e-coli) infection.

Since 1992, when the Saharan aviary was set up for captive breeding of the Western Tragopan so as to augment the depleting population in the wild, this centre has bred only 20 birds and thus far has not been able to release any bird into the wild.

In 2009, two chicks had managed to survived out of 23 fertilized eggs that were laid. 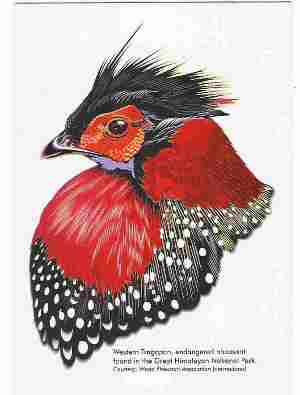 Differing with the wildlife department run program under the supervision of John Corder, a British expert, Kaushlendra Singh, a Lucknow based wild life activist says, â€œAs far as I can make out, the project is heading for total disaster.â€

Singh who has been a member of Uttrakhand Wild Life Board and is currently involved in saving the Dudhwa Tigers along with Francy Hermans, a Belgian breeder of pheasants including Tragopans, on the invitation of Himachal wild life officials had visited Saharan in 2006.

The duo in a written report had pointed out the deficiencies in the breeding program to the Himachal government.

Observations then made by Kaushlendra were, â€œ I was shocked to see the upkeep and management of the worldâ€™s rarest pheasant. With all of them having eco parasites, nutrition being given was as good as being given to village hens, incubator courtesy World Pheasant Association (WPA), United Kingdom was non-functional, no brooders and people entrusted with the job and trained in United Kingdom had no knowledge, as a result year after year there has been no breeding success.â€

When contacted over email about another year of failure in the breeding program and his reaction to the recent death of the birds at Saharan, Kaushlendra said â€œI always had this fear in my mind ever since I visited Saharan.â€

John Corder, a member of WPA under whose guidance the Himachal governmentsâ€™ conservation Western Tragopan Breeding Program has been operating, was here on 14 July, 2010 to attend yet another meeting of the core group of the program.

Catching up with Corder, just before the crucial core group meeting was to be held to discuss the failure of the yearâ€™s breeding season, he point blankly refused to talk.

â€œI will meet the media on my terms,â€ said Corder.

When contacted, AK Gulati, Principal Chief Conservator Wildlife, under whose supervision the conservation program is being executed, he too passed the buck and refused to answer any queries.

A Rs 4.92 crore project for the conservation breeding program as opposed to captivity breeding was sanctioned in 2005-06. 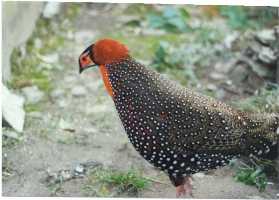 However, the 7 large enclosures (28 m long, 10 meter wide and 4.5 meter high) costing Rs 1.33 crore for the birds to breed under natural conditions that involve no human intervention, are still to come up.

Presently it is only a captive breeding program at Saharan and the natural conservation program is yet to start, says a retired wild life officer.

Francy Hermans in an email response reacted, â€œ1 million Euros made available by the CZA (Central Zoo Authority in India) to breed Western Tragopan. I fail to understand why some-one needs that astronomical amount of monies when I have bred Tragopans in Belgium for 10 times less that amount.â€

He said â€œenough proofs have been given where matters are going wrong. Lot’s of Tragopans are being bred in Europe each year, so why not in Sarahan?â€

Kaushlendra adds that he had written to chief minister Prem Kumar Dhumal, earlier to his predecessor Virbhadra Singh and also to Prime Minister Manmohan Singh about the mishandling of the Saharan conservation project.

â€œI want the Saharan project to succeed but it is indeed very unfortunate that all conservation projects are being run like this one and ultimately they bog down,â€ he said.