Pampore Highlands (Jammu and Kashmir): A 16th-century royal was smitten by the beauty and voice of a singer-poetess in these south Kashmir highlands during a moonlit November night amid the fragrance and magical colours of the blooming saffron flowers.

King Yusuf Shah summoned the husband of Zoon, the singer-poetess, to his court. He was asked to divorce his wife so that the king could marry her. She was christened Habba Khatoun after her marriage to the king.

Like all such romances, Yusuf and Habba Khatoun’s also ended in tragedy. Mughal emperor Akbar invaded Kashmir, Yusuf Shah was arrested and exiled to Patna, where he died. Habba Khatoun lost her mind singing and wailing in the saffron fields and villages, looking for her lost lover. She died in oblivion and nobody knows for sure where she was finally buried. 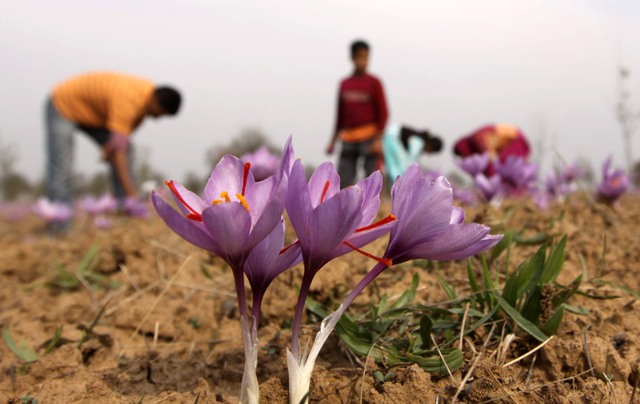 At each blooming, the neighing of Yusuf’s horse and the wailing songs of Habba Khatoun are said to come to life in the Pampore highlands, according to locals. The saffron flowers are in full bloom these days, reminding locals of the royal romance and tragedy as they carefully pick the crop.

Saffron, the costliest spice in the world, is grown on the well-drained highlands.

The high-quality spice comes from the male portions of the flower. The stigmas and the styles are carefully removed from the rest of the floral parts and dried in the mild heat of the autumn sun.

Known for its special aroma, saffron is a powerful flavouring and colouring agent. Many people also use the spice as an aphrodisiac.

As a medicine, saffron is used to cure lower fever, help reduce cramps and enlarged livers and to calm the nerves. It is used as a potion externally for bruises, rheumatism and neuralgia.

Although Spain is the world’s largest exporter of saffron, the best quality still comes from Kashmir. Growers say Kashmir’s saffron gets a bad name because many unscrupulous traders have been adulterating it by mixing it with poor quality saffron grown in other places.

Although the price of a kilogram of saffron has risen to Rs.400,000 (over 7000 USD) during the last decade, the total production of the crop in Kashmir has fallen from 10 tonnes to six tonnes during this period. 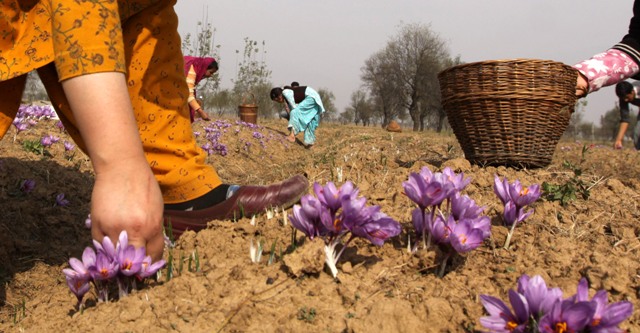 To check the declining production and to improve the quality of the crop, the central government announced a multi-crore National Saffron Mission two years ago.

Besides being a highly-valued spice, saffron is seen as an icon of Kashmir’s heritage.

“Most ceremonies, including weddings, betrothals and even official functions are incomplete without a dash of saffron in the traditional brew known as the Kehwa served to the guests on these occasions”, said Nizam-ud-Din, 63, a resident of the old city in summer capital Srinagar.