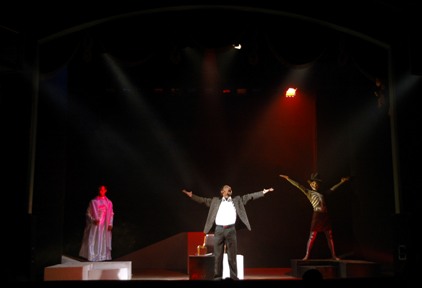 Shimla : Agony of a proud Dr Faustus seeking redemption in his final hour before devil Lucifer carries away his soul, something that he has traded for a life of vice and power, mark a befitting end in the Hindi adaption of Christopher Marloweâ€™s play that was enacted at the historic Gaiety Theatre, much to the delight of theatre lovers.

By mocking at himself for being nothing more than a man, the learned man finds attraction in the power of magic â€“ magic that ravishes him; and nothing shall daunt his determination to command all things.

A bad angel, who objectifies appetite that is in conflict with the good angel symbolizing conscience makes Faustus resolve to seek out professed magicians so as to master magic.

Inflamed by the power of mastering magic, Faustus gives in to material pomp and sensual delights.

Through magic, he invokes out Mephistopheles, a companion of Lucier who together have been condemned to Hell for having aspired to overtake the throne of God.

At the nudging of Mephistopheles, Faustus falls for the temptation of trading a 24 year life full of voluptuousness for his soul by signing a bond in blood with Lucifer.

Blinded by the power of knowledge and magic, Faustus brushes aside all timely warnings of conscience.

With the help of Mephistopheles, the embodiment of purchased power, he surfeits his sense with carnal pleasures, not coarse delights but highest and deepest enjoyment.

Faustus mind is delighted with the dump-show of Devils that Mephistopheles presents before him be it his longing for the fairest maid in Germany or bringing alive Helen of Troy, whose famed beauty makes man immortal with a kiss.

In the midst of all this, the horror of damnation seizes him now and then and increases with the passing of years.

Unable to heed sane advice about making amends to his character and repent for his sins and, pull of evil with which Faustus has associated for long ultimately prove too much to resist.

It is these pleasant vices that turn into instruments which plague him in his final hour, when Faustus seeking redemption, curses his birth, his parents, Lucifer, appeals to hills to hide him, to the mountains to fall on him, to the earth to harbor him, to stars to save him that brings the tragedy to a climax.

As in life, so is Faustus alone in suffering.

Faustus creates in us a feeling of loss, a sense of waste; who as a man of learning weaves the threads of his tragedy by signing his own death warrant in blood and himself becomes the battleground for one of the greatest mental conflicts of man.

Saurabh Agnihotri as Dr Faustus, Dhirender Rawat as Lucifer and Rajiv Sharma as the evil angel do justice to truly tilt the drama in favour of a life of sin rewarded with banishment into hell without any hope of redemption.

The single stage setting, differentiated only by lighting effects to create different scenes helps to run the play through uninterrupted. The music is haunting and the make-up, especially at a point when the beauty of Helen is peeled to the ugliness of Mephistopheles is visually dramatic.

Even though this adaption has small episodes missing, like the one where Faustus brings alive the spirit of Alexander and his Paramour, but on the whole director Kedar Thakurâ€™s, 15 year experience in theater has stood him ground by putting up a play that his well enacted.