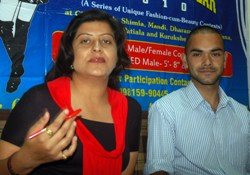 Shimla: Scouting for hidden talent and providing a platform for budding models, Chandigarh based group The League here announced holding of Glam Super Model, 2010 contest for the city.

â€œAfter having held our first show in Chandigarh, we intend to seek out latent talent across cities like Shimla, Mandi, Dharmshala, Ludhiana, Patiala and Kurukshetra,â€ said Ekta Sharma, director of the group.

Winners from city specific contests would be groomed and trained to finally compete on one stage at Chandigarh, in December. The contest at Shimla has been scheduled for June 7, said Ekta.

The League is holding the model contest in collaboration with Amartex group.