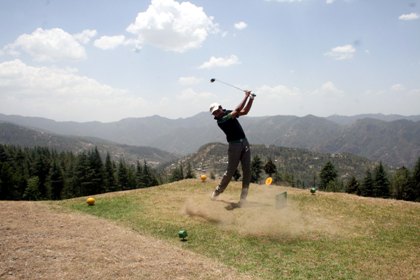 Naldehra – Shimla: Golfers teed off early in the morning to compete for the one day 2nd Carlsberg Golf Tournament at Naldehra, the countryâ€™s oldest golf course, to finish the game as the harsh mid-day sun came about.

Arjun Sood was declared champion of the tournament with Prithvi Sen was the as the second runner up. The nearest to pin award was given to Ankush Dan, the longest drive to Ashwani Mehta, maximum birdie to Prithvi Sen and eagle award to Arjun Sood.

Speaking at the prize award ceremony, chief minister Prem Kumar Dhumal said that it was heartening to know that young and budding golfers were winning prizes and inspiring others to excel in the game.

Commending Carlsberg for sponsoring the event, he said that such tournaments did help to promote tourism and hoped that more such competitions are organized. 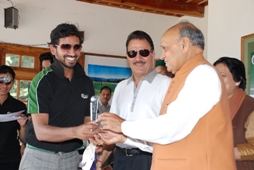 Surinder Attri, director Carlsberg (India) said that their group was proud to be associated with hosting this tournament at the countryâ€™s oldest golf course.

Laid out in 1905 by British Viceroy Lord Curzon, the Naldehra Golf course is laid out in a picturesque but challenging terrain at an altitude of 2,200 meters in a meadow surrounded by thick Himalayan Deodar trees.

It is a par 68, 18 Hole Golf course with 16 Greens and 18 Tees. Designed over a long sloping glade, the course is regarded as one of the most challenging golf courses in the country.