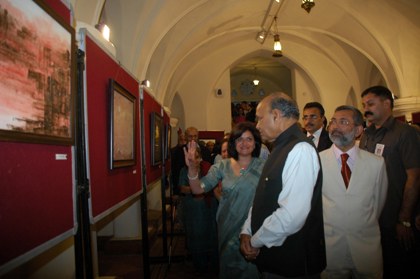 Speaking on the occasion, the chief minister commended the artist. He said, â€œwith the opening of Tavern Gallery in Shimla, more and more artists were beginning to exhibit their works in the city.â€ 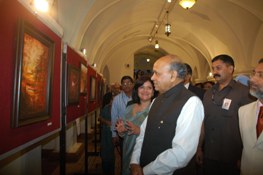 The artist draws inspiration from the richness of natural beauty so abundant in Himachal, the world she live in, and from her many travels.

The canvasses on display encapsulate the essence and spirit of natureâ€™s myriad hues, with which the artist has a deep and intimate empathy.

Speaking about her work, Punam Gupta said that painting was a passion and some of the works on display were almost 15 years old, while others are as recent as one or two years old.

â€œThis happens to be my second exhibition and the first one in Shimla,â€ she said. The earlier exhibition was held at the India Habitat Centre, Delhi in 2004, she added.

After going around the exhibition, senior artist Baniprosonno, back from recently having held an solo exhibition at Reykjavik in Iceland before a volcanic eruption had grounded Europeâ€™s flight schedules, said, â€œthe touch of abstraction in the landscapes is very good.â€

Punam Gupta was born in Chandigarh and began painting at an early age, under the guidance and inspiration of her mother Santosh Manchanda, an acclaimed artist.

â€œIt was from her that I inherited the sensitivity to see the world in ways that are fresh and original and a flair for creative expression,â€ says Punam.

Largely self-taught, the artist did study painting at Triveni Kala Sangam, New Delhi. Although involved in a large range of other creative pursuits over the years including illustrating, writing and theatre, she continued to paint in oils and water colours, steadily honing and refining her skills and techniques.

Punam Gupta is married to Deepak Gupta and lives in Shimla.