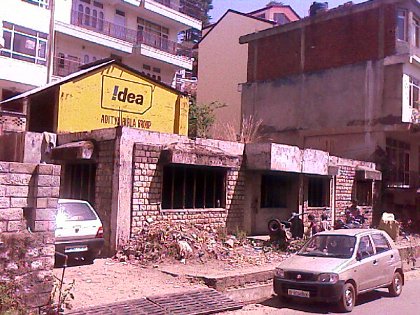 Shimla: A dilapidated built up structure on a small plot being used as a nighttime shelter by an insane Gorkha, fetched a whopping price Rs 1.86 crore when it went under the hammer on Sunday afternoon.

â€œThis is perhaps the highest prices that a plot of that size has ever fetched here,â€ said Rajnish Khimta, who was present at the auction. Owning a home in Shimla did attract the powerful and rich during British days but given todayâ€™s record one can say that the rich still fancy a cottage in the hills, he added.

On a reserved price of Rs 47 lakhs, the opening bid for plot No D -13 started at Rs 58 lakhs and quickly climbed up to over Rs 1 crore. Of the 25 bidders that participated in the auction, the hammer fell to Delhi resident Sunil Kukerajaâ€™s call at Rs 1.86 crore about half an hour after the floor was opened for bidding.

On learning about the high bid, Ramesh Chauhan, who lives in the neighbourhood of D -13 said, â€œan insane Gorkha has been living on this expensive piece of real estate for the last 15 years.â€

In all only two plots were sold at the Sunday auction. For the other small plot of 120 square meters, the bid closed at Rs 41.40 lakhs.

â€œSuch an high bid was an eye opener about prevailing land prices,â€ said an senior officer who was present during the bidding process but did not wish to be named.

â€˜Not only would this be treated as the new benchmark for future land deals but even prices in the grey market, which is not a secret as benami deals continue to rule the roost, would also be re-priced,â€ said the officer.