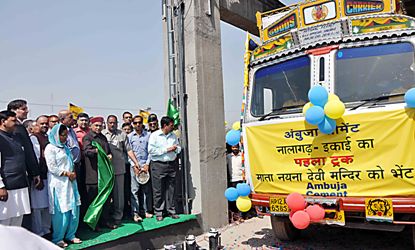 Shimla: Cement major, Ambuja Cements commissioned a 1.5 million ton capacity grinding unit at Nalagarh on Saturday, making it the companyâ€™s 12th such plant in the country and the 3rd on in the state of Himachal Pradesh.

Chief Minister Prem Kumar Dhumal who inaugurated the plant said on the occasion the environment and employment were two top priorities for the government.

Construction of the Rs 300 crore plant started in January 2009 and has been completed in the nick of time before the excise exemptions allowed for the state expire three days later.

This unit on the foot of the Himalayas and close to Punjab would use clinker produced at the companyâ€™s Rauri unit that is 95 km from the plant.

The company management claimed that the new plant employed state of the art German technology to have in place a fully automated production process.

The plant is expected to meet the increased demand in light of the state governmentâ€™s commitment to infrastructure development, said a company spokesman.

The cement would be made available in specially designed 50-kg bags that are tamper-proof and seepage-proof. The Nalagarh unit can also supply cement in bulk tankers to large construction projects and concrete product makers and to ready-mixed concrete and batching plants in the region, he said.

Other than being energy-efficient the plant would consume fly ash from the thermal power plants in the neighboring states of Punjab and Haryana.

The plantâ€™s emission level will be way below the State Pollution Control Boardâ€™s limit of 50 mg/Nm3, the management claimed.

Speaking on the occasion, the CEO-designate, Onne van der Weijde, said, â€œI expect this unit to augment the process of industrialization of Himachal Pradesh and contribute towards generating revenues for the state as well providing direct and indirect employment opportunities for the people.

On the occasion, Ambuja Cements also contributed Rs 50 lakhs to the Chief Ministerâ€™s Relief Fund and another Rs 50 towards the HP Martyrs and War Widows Fund. 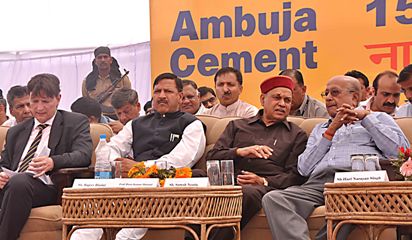 Ambuja cement has a current cement capacity of about 23 million tones, which it plans to scale upto 25 million tonnes by 2010. The company has 5 integrated cement manufacturing plants and 6 cement grinding units across the country.

The cement major has a captive port with three terminals along the countryâ€™s western coastline to facilitate timely, cost effective and environmentally cleaner shipments of bulk cement to its customers. It also own fleet of ships for the purpose.