Shimla: Himachal Kishan Sabha (HKS) has threatened to stall work on a major hydroelectric power project being executed by a central public undertaking unless problems of projected affected people and an ongoing agitation by workers was not resolved peacefully. 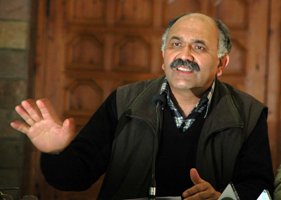 President of HKS, Kuldip Tanwar let media persons know that SJVN, the public sector undertaking which was executing the Rampur 440 MW project in Satluj valley was not meeting its commitments towards the 8 villages that are in the project affected area.

â€œRecent blasting for executing the head race tunnel for the project has damaged a lot of houses and most of the natural streams and other water sources in the area have dried up, causing scarcity. The public undertaking that was supposed to duly compensate the damages caused and augment water needs in the area is not meeting its obligations,â€ said Tanwar.

Even the annual Rs 2.5 crore, which was to be provided for local area development, is not being released, he added.
Showing solidarity with workers of Rampur project who are on strike for the last four days, he said that unless all pending farmers and workers issues were not resolved soon, the Sabha would join the workers and completely hold up work on the project from 7th March.

SJVN, a ‘Mini Ratna’ CPSU which is in the process of divesting 10 % equity in the company is in advanced stage of constructing the Rampur project that is being executed through Gammon India and Patel Engineering. Whereas this project is scheduled for commissioning by January 2012 but is running behind schedule. SJVN also operates the 1500 MW Jhakri project, which is the country’s largest hydro power project.

Talking about issues confronting the farmers, Tanwar said Jaal-Jungle aur Zamin (water, forest and land) issues were destabilizing rural populations and successive elected governments that should be standing with the people in distress situation were protecting corporate interests in the name of development, he said.

Citing the recent clash between protesting farmers and contractors of a small power project company in Saal Ghati in Chamba, he said that micro hydel projects were blatantly encroaching upon farmers rights upon drinking water or small irrigation schemes and affected people were demanding scrapping of such projects. 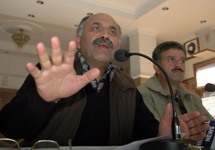 Speaking on the occasion Sanjay Chauhan, state treasurer HKS said that they would not allow shutting down of the carton manufacturing unit in Kotkhai, which the government was trying to sell very cheaply. For an asset value of the unit that was more than Rs 80 crore, the unit was attempted to be sold by bypassing cabinet approval and the tendered value for it received was just Rs 1.08 crore, alleged Chauhan. â€œSuch loot we will not allow,â€ he said.