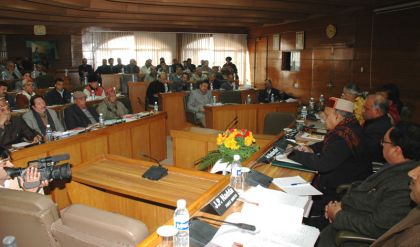 Shimla: The government proposes to put up an Rs 3000 crore annual plan size for 2010-11 before the Planning Commission, which would be Rs 300 crore more than the last annual plan, chief minister Prem Kumar Dhumal disclosed today.

Initiating a two day discussion on the Annual Plan 2010-11 with members of parliament (MPs) and legislative members (MLAs), the chief minister said that there was a need to re-jig the norms under Backward Area Sub Plan as most backward areas had crossed the developmental indicators provided for under such special plan.

Budgets for 6 priority projects in each assembly segment had been enhanced Rs 3 to Rs 5 crore, enabling each constituency to implement projects worth Rs 30 crore under the annual plan, he disclosed.

The 2009-10 plan was of Rs 2700 crore size and projects worth Rs 27 crore for each constituency were permitted under it.

Against a target of Rs 406 crore fixed for the MLA priority schemes under NABARD funding for 2008-09, schemes sanctioned stood at Rs 425 crore and for the current financial year a target of Rs. 454 crore had been set out, said Dhumal.

Stressing upon the need to cut expenditures and increasing resources, the chief minister sought suggestion from the lawmakers. He also asked administrative secretaries to submit quarterly reports about steps taken to raise resources and bring down unproductive expenditure.

In response queries about bringing more apple producing areas under Crop Insurance Scheme, Dhumal said that only few blocks had been brought under a pilot project and depending upon its success only would it extended to other parts of the growing areas.

Speaking on the occasion chief secretary Asha Swaroop said that participative approach with public representatives in plan implementation, started in the year 1998-99, had proved beneficial in accelerating development.

In the forenoon session on first day MPs and MLAs from Shimla, Sirmaur and Solan districts participated in the discussion.

Suresh Bhradwaj, MLA from Shimla said that posing Shimla water supply scheme from Pubbar for World Bank funding would solve the water problem of Shimla town to a great extent. He asked for speedy construction of Shoghi Mehli high way for movement of heavy vehicles to avoid road congestion.