Shimla: Surfacing of 3 CDs targeting the BJP government and its MP have fueled opposition Congress into action who on Wednesday demanded resignation of BJP parliamentarian Virender Kashyap and sought a CBI inquiry into the phone tapping issue revealed in the two audio CDs and the video CD allegedly showing illegal cash transactions.

Kuldeep Rathore, congress spokesman told media persons that the opposition has been holding that the ruling party is victimizing and falsely implicating congress workers.

He said that the contents of the CD were a serious matter and as the congress did not have faith in state agencies. Voices can be heard directing senior police officials to tap phone of opposition leader and as the two audio CDs allegedly involve the chief minister, it should be probed by CBI.

Earlier in the day chief minister Dhumal had announced a CID probe into the surfacing of the CDs as well as its contents. Dhumal denied phone tapping charges and termed the CD contents as â€˜fake and fabricated.â€™

He said “I have asked the state CID to carry out a probe into the CDs to bring truth before the people.”

Government sources said that Additional Director General of Police, CID, I D Bhandari, had been asked to carry out the a probe â€˜at the earliest.â€™

On the other hand congress has rubbished involving a state agency to inquire the sensitive matter.

Rathore said that congress had no faith in any state agency and only a CBI probe would ravel the whole truth.

When Suresh Chandel, another BJP MP was picked up on camera taking cash in the notorious cash for question scam that had rocked parliament, the MP had resigned, he said. Likewise Kashyap should also resign, he added.

Rathore urged Meira Kumar, the Lok Sabha speaker to take cognizance of the incident involving a parliament member of BJP.

However BJP has come up in defense of its battered parliamentarian. â€œAllegations against Virender Kashyap are baseless and there is no truth in them, said Ashok Kapathia, BJP spokesman. â€œThis is a well thought out conspiracy hatched by political opponents to tarnish both the MP and the BJP government,â€ he said. 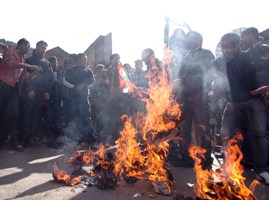 Elsewhere, charged up youth congress workers held a demonstration at a protest point near The Mall Road and also burnt an effigy of the chief minister.