Shimla: In the thick of controversy Virender Kashyap, the BJP parliamentarian has ruled out resignation over the video exposÃ© in which he is shown to allegedly accept illegal money from unidentified person, just before the May, 2009 general elections. 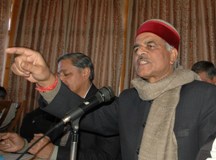 â€œWhy shall I resign,â€ said Kashyap to the media here today. The CD circulated against me is fabricated and there is no truth in it, said the first time Lok Sabha MP from Shimla.

He said there was no parallel between his case and that of former BJP MP from Hamirpur Suresh Chandel, who had to resign in the wake of cash-for-question scam.

When asked if some unidentified persons had given him money to acquire land for setting up an educational institution at Solan as alleged in the CD, the BJP MP said he did not remember the particular incident. “People come up with problems to politicians and I am no exception”, he responded.

The BJP MP said he had found a packet of money containing Rs 25,000 when he had gone to a marriage ceremony at a hotel in Solan before LS poll in April last year which he had deposited with the police.

Kashyap, who registered his maiden victory on Shimla seat in last general elections after four unsuccessful bids in that past, said it appears (releasing video CD against him) a conspiracy of his either political or personal rivals.

Two audio CDs against Dhumal and a video CD against Kashyap was sent to some newspapers office here last night without anybody taking credit for the release.