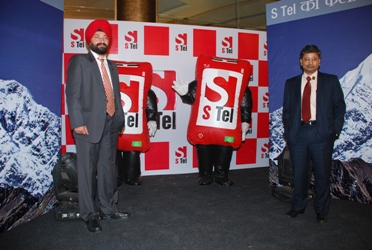 Shimla: Targeting a subscriber base of 1 lakh in three months S Tel, the newest GSM mobile player made its intentions clear as it launched operations in the country from here, to be around when the competition gets more intense over the next five years.

Speaking at the launch P Swaminathan, director S Tel â€œwe have come prepared for the competition, knowing that there are already eight mobile companies operating in Himachal.â€ Battle ready with the network starting out from 500 towers sites, he said, â€œno other player big or small has offered such a large coverage area in the state on the day it was launched.â€ All the towers are EDGE enabled, which would permit a better browsing platform than the traditional GPRS system, he said

For a war chest, S Tel has an equity base of Rs 1250 crore and achieved the fastest financial closure with an loan of Rs 950 crore from IDBI bank. Swaninathan said, the company would price wise be competitive, will rely on better coverage and are geared to provide better service, especially to the pre-paid subscriber who is at the receiving end elsewhere.

Retaining all key areas of the network like brand operation, customer, distribution, Balwinder Chawala, COO, Himachal and J & K in his presentation said â€œto be cost effective other operations like towers have be outsourced on a sharing basis or through strategic partnerships. IT services providers to the network are Tech Mahindra,â€ he added.

Banking heavily on the number portability that is likely to come into effect over the next three months, the newest mobile telephony player has an aggressive tariff plan simplified down to just 1 paisa per second and 50 paisa per minute for both local and pan India calls.

â€œThe IP based network has the advantage of using the latest technology, which would enable us to adapt to newer technologies as and when they become available,â€ said Swaminathan.

Spread out over four zones Shimla, Baddi, Kangra and Mandi, the management claimed to have in place a coverage of 50 census towns, 705 non-census towns and 7,3 00 village across nine districts of Himachal. Other than the districts of Chamba, Kinnaur and Lahaul Spiti, the service has been made available in all other districts.

Besides, Himachal the network is scheduled to start operation in other category C states of Orissa, Bihar, Jharkhand, Assam, North East and Jammu & Kashmir soon. In these states, which the company termed as growth states, the management targets to corner about 15 percent of the market share by 2015.

â€œFor Himachal, where we launch services today, the target is to have 1 lakh subscribers over the next three months,â€ said Chawala.

S Tel is a joint venture between Siva Group (formerly Sterling Infotech Group) and BMIC Limited, a subsidiary of Bahrain Telecommunications Company (Batelco). While Batelco holds 49 per cent stake in S Tel, Siva group holds 51 per cent stake. Over the next fortnight, STel is scheduled to launch services in Bihar and Orissa.