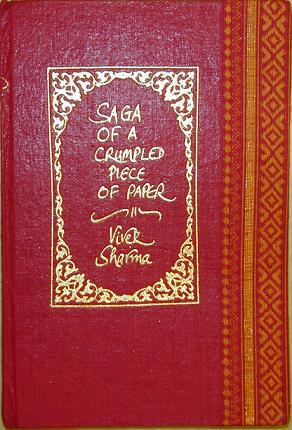 Vivek Sharma, as readers might know, contributes verses and articles in Hindi to this website. Vivek is interested in education , philosophy, science and Indology, and his writings blend these with words that are written as expression of human emotions, feelings and ideas. Vivek Sharma’s collection The Saga of a Crumpled Piece of Paper (63 Poems, English) was published recently by Writers Workshop, Calcutta. Vivek’s work appears in Atlanta Review, Bateau, Poetry, The Cortland Review, Kartika Review, among others. He writes columns and verses for Divya Himachal (Hindi newspaper in India) and his research is published in science journals. Vivek grew up in Himachal Pradesh, and moved to United States to pursue graduate studies in 2001. Vivek participated in Summer Seminar for Writers in Sarah Lawrence College in 2006, 2007 & 2008, and has received a Pushcart nomination for his poem. He obtained a PhD in polymer science and engineering from Georgia Tech.

At Georgia Tech, Vivek found a mentor in Thomas Lux, who writes in the introduction to this book: “About his poetry, specifically, Iâ€™m going to be short but incisive: he is a gifted young poet with a rare sense for the texture of language, he knows how to use language in such a way that it helps the reader explain him/herself to him/herself. His poems provide for me â€œa momentary stay against confusionâ€ as Mr. Frost defined poetry. Heâ€™s a lyric poet with a narrative streak… His poems, particularly his village poems, are filled with people, with characters. In seeing the dignity as well as the foibles of one culture it reminds us of our own dignity and foibles. Itâ€™s a very big village he writes about and his poems are bridges across a wide ocean. He is a member of the tribe, albeit scattered all over the planet, of poets. He is, and will be, one of the voices the future of poetry needs to hear.”

Publisher, poet, translator, P Lal, (of Writers Workshop) says: “They are shining instances of remarkable insights, and insights never get crumpled. They are original, stimulating and have a remarkable quality of blending ironic Western values with pastoral gentle Indian ideals.”

The book is available from http://tinyurl.com/BookofPoemsVivek and is: Limited edition. gold-embossed, hand-stitched, hand-pasted & hand-bound by Tulamiah Mohiuddin with handloom sari cloth; Printed by Abhijit Nath, in a Lake Garden Press (ISBN Number : 9788181578518).

The collection has four sections: first one has poems for a beloved, second one about a lost beloved, third one has random thoughts and the fourth one is about how an Indian poet in America keeps remembering his home country and his own people. The last poem, “Half-happy with India turning into a trillion dollar economy” was nominated for a Pushcart, and “Your face” was published with audio online at http://www.cortlandreview.com/issue/38/sharma.html#1 Another poem published online is The Coke Story at http://www.kartikareview.com/issue5/5sharma.htm Few other poems that appear on Vivek’s personal blog, that appear in the book in revised versions, are: Boston Bhaaratiya, Pearl Earrings, Mumbai Burns, The Story of Ramdas, and Faded Sarees. It seems most of the romantic poems included in the book were never posted online.

Vivek’s biographical sketch from the book:

Vivek Sharma was born in Mandi, (Himachal Pradesh) in 1979, and his ancestral village, Chattar, in the same district. He received schooling in Shimla, Una and Kasauli. His parents were determined to provide him with the best possible education in English medium schools and sometimes this forced them to live apart from each other. Their struggles kept him motivated to do well in studies, and enter Indian Institute of Technology, Delhi in 1997. Vivek moved to US in 2001, obtained a MS in Polymer Science from University of Akron, OH, followed by a MS in Chemical Engineering and PhD in Polymer Science and Engineering from Georgia Institute of Technology, Atlanta. Vivekâ€™s love of verse and wordplay in English and Hindi language began early and at home. He wrote throughout his school and college days. But it was after Vivek met â€˜Gurudevâ€™ Thomas Lux that the love turned into a quest, the pastime into a pursuit and he understood the importance of craftsmanship in poetry. Vivek currently residesn in Cambridge, MA where he is a post-doctoral research associate in Mechanical Engineering at Massachusetts Institute of Technology (MIT).