Shimla: Himachal Governor Prabha Rau, was today administered oath as governor of Rajasthan as she was handed the additional charge in a simple but an impressive ceremony held at Jaipur. 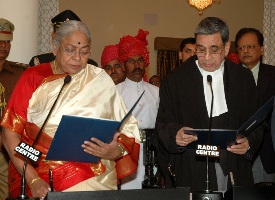 T Shriniwasan, chief secretary of Rajasthan read out the warrant of appointment issued by President of India appointing Prabha Rau as Governor of Rajasthan.

Ashok Gehlot, chief minister of Rajasthan and his cabinet colleagues, senior civil and army officers were present on the occasion. among others.