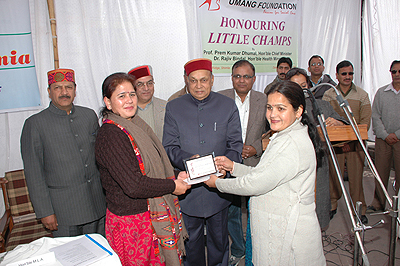 Shimla: The stateâ€™s premier health institute, Indira Gandhi Medical College and Hospital is to be equipped with an eye bank facility and a separate ward for housing Thalassemia patients would be set up, Chief Minister Prem Kumar Dhumal disclosed at a blood donation camp today.

Speaking on the occasion, the chief minister said that a need for an eye bank was being felt for long and efforts were afoot to set up one at IGMC on priority. Such a facility would help to motivate people to donate their eyes that on being transplanted would enable visually impaired people to see.

Health minister Rajiv Bindal, who accompanied CM said that blood separating units had been established in IGMC Shimla and another was proposed to be set up at Tanda medical college, Kangra.

Ajay Srivastava, president, Umang Foundation, urged the chief minister for creating necessary infrastructure in major hospitals to meet the needs of Thalassemia. Dhumal also announced a grant of Rs 1 lakh for the foundation.