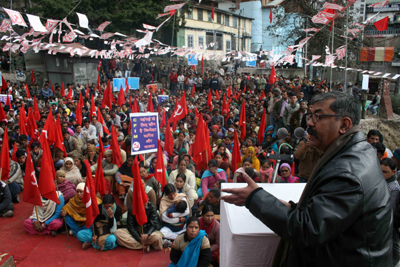 Shimla: Holding UPA government policies responsible for incessant rise in prices of essential commodities, CPI(M) today held a protest demonstration in the capital where it was demanded to bring out food items from futures contracts in the commodity market and make PDS access for everybody.

Addressing a rally after culmination of a protest march through the Lower Bazar, Nilotpal Basu, a former CPI(M) MP said that price rise because of the central government policies had reached alarming proportions. â€œFood was getting out of reach of the poorest of the poor and nutrition levels of many others were falling drastically,â€ said Basu. He said that a NSSO sample survey showed that more than 80 crore people were living on a Rs 20 day wage.

He said that a major reason for the price rise was the central government policy to allow futures contracts trading of essential food items.

Rakesh Singha state secretary CPI(M) made a connect between price rise and squeezing of the Public distribution system. â€œThe PDS is being targeted so that the common people are deprived of this opportunity and are forced to fall to the open market ration,â€ he said. Three successive crop failures resulting in a loss of nearly Rs 1200 crore had left the people very vulnerable and neither the state nor the central government were providing relief, he added. 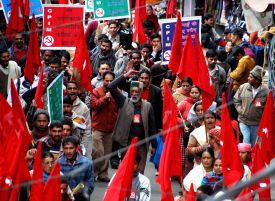 Ridiculing the state governments sops of declaring 3 extra holidays for women in the state on Bhaiya Dooj, Karva Chauth and Raksha Bandhan, Falma Chauhan state committee member, said â€œextra holidays do not compensate for access to lesser food on the table which was hurting women the most.â€

She further said that the state government had ruined the health services in the state as the Rogi Kalyan Samitis had become instruments for fleecing poor patients. â€œIt actually is a blatant step towards privatizing healthcare,â€ she remarked.