Nobody can miss them. They are all over the place, an integral part of the urban eco-system.

Little infants clinging to their mothers’ underbelly, tight rope walking on slender telephone cables strung across streets; juveniles mischievously scurrying about and swinging on anything that hangs or is horizontal; adults scavenging incessantly for food in and out of rusted, geometric municipal waste bins and the older ones getting their ticks picked and eaten by each other or those of the younger lot they manage to entice.

When the sun comes out in Shimla (which is not often circa 2012 AD), troupes of monkeys sprawl on the town’s corrugated roofs, lazing or sleeping or generally fooling around, much like the Burra sahibs of the erstwhile Raj.

Occasionally a short fight breaks out among troupe members or a dominant male gets into a frenzy jumping on pillars or poles and violently shaking them as if to vent pent up frustration; something the more politically inclined amongst us ought to be doing.

However, unlike the prudish Sahibs of yore, the monkeys of Shimla are more open (minded?) and uninhibited about their primary primate inclinations. They do it openly and annoyingly frequently.

Mercifully their Act is short and swift; much like the allegorical wham-bam T Y ma’am stuff. It does seem to work though, given the addition of scores of infants every June / July to the already high monkey population and straining Shimla’s civic amenities.

On top of it we are informed that the women of our prurient macaques are wantonly polyandrous. I am sure the gentlemen macaques couldn’t help but being of quite a parallel polygamous disposition.

This no holds barred strategy to “go forth and multiply” ensures a growing next generation and a recurring nightmare for the Government’s much vaunted monkey sterilization programme. Mercifully, unlike the more evolved humans, simians are not insane about having sons!

Being primates, the Rhesus macaques are of similar intelligence as other species in their Order that importantly includes the pompous Homo sapiens.

The monkeys of Shimla, descendents of forebears who lived through the Raj and having been urbanised long ago, are certainly better educated and a lot more street smart than ordinary, wild macaques or baboons that live a more hidden life in the deodar forests.

They can make out the approach of the dreaded Monkey Sterilization Van from the sound of its engine and promptly disappear into the hills. 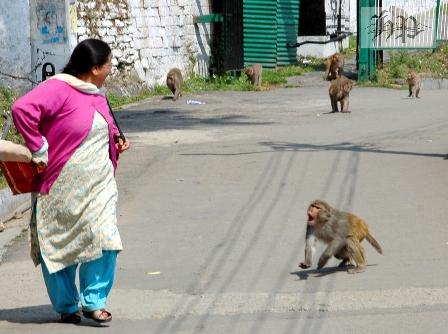 No amount of bananas and peanuts will lure them into the cages set up by a desperate Forest Department chasing steep sterilization targets.

Shimla monkeys are also more urbane and trendy than their cousins in lesser towns for, like our younger generation they eat a lot of junk(ed) food.

For one, our simians know when and whom to strike. Ladies first! So much like their human counterparts, I would say. And do it when she’s alone; or at the most with her little children.

Raid the vegetable vendor when the fellow has gone to relieve himself; school children who carelessly carry snacks or lunch boxes openly; the grocer when he is frantically calling on the phone.

Avoid cops and clerks especially when they are returning from work and are eager to make up for lack of action in the office.

Shimla monkeys, perhaps because of their shared ancestry with humans, have a definite streak of naughtiness bordering on the wicked.

At several points, especially those frequented by snack gobbling tourists, our simians have perfected the craft of blackmail by taking away bags or cameras and even spectacles of unsuspecting visitors with the skill of Mumbai pickpocket!

Where warranted they will simply growl and pretend to spring at the more timid looking and as the “victims” are in terrified retreat, the simians coolly walk away with their eatables. But these thieves have an ethic; they will return your valuables once adequately compensated.

Like their ilk elsewhere, monkeys flock around temples. It is here that this oft persecuted lot gets some attention and respect; even from vendors whose business is linked to simian abundance and opportunistic gluttony.

What with constant feeding by the devout and the doubtful and sometimes by the sanctimonious temple priests; the near absence of humans losing their cool and chasing the monkeys back to the roof tops, cussing and cursing and throwing stones at them.

Especially in Hanuman temples like the Jakhu hilltop one where now a gigantic statue of the Monkey god stands installed.

Here the simians of Shimla are the lords whom people from far and near come to worship, to feed and to hope that the mighty Hanuman will help them in their very own battles of life.