Manali: Residents of tribal lands of Lahaul blocked traffic at Tandi bridge for over 7 hours on Thursday demanding improvement of road conditions on the Manali-Leh road, a lifeline to the landlocked high altitude region.

The protestors are particularly agitated by the bad road conditions between Rahni Nallah and Rohtang Pass in Kullu valley that is under management of Border Roads Organization. 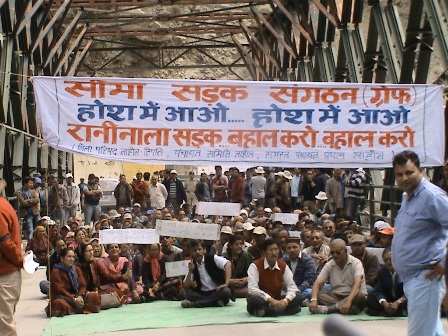 Besides the villagers, members of Panchayati Raj Institutions among those protesting for better road conditions were ruling party MLA Ram Lal Markanday and former legislator Raghubir Thakur, who belongs to opposition Congress party . 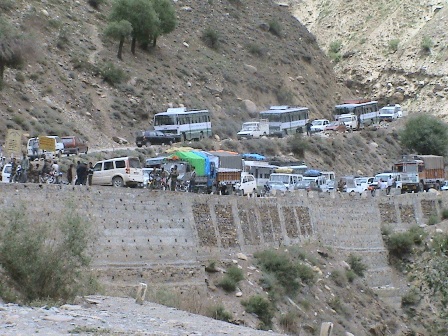 Police and sub division magistrate who rushed to the spot and attempted to break the dead lock was unable to do so for 7 hours.

A large number of vehicles on both sides of the bridge had queued up and were not allowed to cross the bridge, delayed reports reaching here stated.

Due to heavy snow on Rohtang Pass in winter months, Lahaul valley for over 6 months remains cut off from country’s road network.

This region that marks the Indo-China border is connected only by helicopter flights during the winter months, helping people to meet their emergencies and facilitate movement of people.

It was only last month that the pass was declared open but with monsoons breaking out in Kullu – Manali region the sliding zone at Rahani Nallah has further deteriorated, causing frequent breakdowns to the road traffic.

To provide round the year road connectivity to Lahaul valley, the strategic 7 Kms Rohtang tunnel is under construction.