Shimla:The bar and the bench are at loggerheads over extending of working days at the Himachal High Court with the bench having reduced a six week winter vacation by one week for clearing backlog of pendency cases. 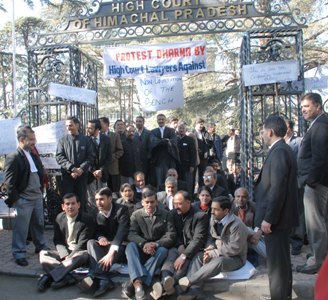 Bar president Ashok Sharma let My Himachal News know that lawyers were not opposing extending of the working days in year 2010 from 210 to 215 days but were seeking that the tradition of having a six week winter vacation not be reduced.

â€œInstead we are asking for curtailing a 4 day holiday break for Holi and a 3 day holiday break for Janamasthmi to compensate for the extra working days that the court wants to schedule,â€ said Sharma. The bar is not in favour of reducing the 6 week winter vacation, which the bench has thrust upon unilaterally, he said.

Efforts to arrive at a consensus over working days collapsed on 22nd December when the court announced the new years working calendar, said the bar president.

â€œLawyers since then have been protesting the move and intend to intensify the stir from Friday by marching through the town,â€ said Sanjeev Bhushan, a member of the bar. The court was expected to close for winters on 10th January but according to the new calendar it would now close on 16th January, he said.

On contacting the High Court office, an official not authorized to speak on conditions of anonymity said, â€œit was at Prime Ministerâ€™s call asking the courts to increase working hours and days for clearing pendency that the bench here decided to extend working hours by 15 minutes and days by one week.â€

On the other hand, bar president Ashok Sharma maintained that compared to other High Courts of the country the pendency at Himachal High Court was not much as it had a full bench of 9 Judges.

Secondly that they were not opposed to increasing both time and number of working days, it was only a question adjusting the holidays in a manner to keep the winter vacation at a 6 week break as it has been since the court came up here, he said.