Shimla: Rating the two year performance of the BJP government as a failure on all fronts, congress state president Kaul Singh Thakur said that enough was enough and the opposition was would launch a movement to dispel the propaganda unleashed. 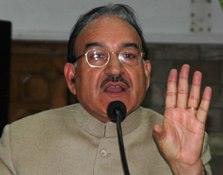 Talking to the media here today, he said that the state government was on crutches and it was only because of the UPA government in the centre that it was able to secure some institutions of repute like the Indian Institute of Technology (IIT), a central university, a national institute of fashion technology and the country first ESI medical college for Himahcal.

On the other hand the state government has approved 16 private sector universities which not only threaten qualitative impartment of higher education but would also commercialise the sector, said Kaul Singh.

A two year period is enough to judge performance of a government and this government of Prem Kumar Dhumal has failed on all fronts, commented the congress president. â€œContrary to tall claims of having fulfilled 80 percent of their manifesto, a closer examination would show that the governing party has betrayed the peoples trust,â€ he said.

He counted that instead of expanding the state administrative tribunal by opening a Dharamshala bench as stated in BJPâ€™s manifesto, it was shut down. A commitment to contain price rise has resulted in prices of essential commodities being at all time high with quotas of rice reduced and edible oils and pulses not available at fair price shops, he said.

He mentioned that BJP manifesto resolve to provide farmers relief from wild animals, especially monkeys had failed because of pressure from their affiliate wing the Bajarang Dal.

He said that there were over 400 positions of doctors lying vacant and funds from Rural health Mission were being diverted which had severely affected health care services in rural areas.

With over 17,500 posts of teachers lying vacant, education system in tribal and backward regions of the state had been badly hit. On top of it, teachers recruited by parent teachers associations (PTA) were being victimised on political grounds and were being removed at will.

Indicting the government for its failure to maintain law and order, Kaul Singh said that thefts, especially of heritage temple idols was on the rise and no serious effort had been made to nab the culprits.

He said that despite a inquiry committee appointed to inquire into the over 200 deaths in the Naina Devi temple stampede tragedy having been submitted to the government, it had not been made public so far.

The committee has clearly indicted the administrative failure on the part of the government and that is why it was hesitant to lay the report findings before the people, said the congress president.