Shimla: Even as many PSUâ€™s are struggling to keep afloat and find means to meet salary bills, the government today announced a New Yearâ€™s gift for HP State Electronic Development Corporation by releasing revised pay scale as the corporation has turned tables by wiping out accumulated losses and turning in a profit. 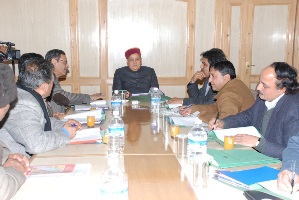 Presiding over the 79th AGM of the corporation, chief minister Prem Kumar Dhumal decided to release revised pay scales to the regular and contractual employees from January 1, 2006, benefitting 87 employees of the organization.

He said that the state government had accepted recommendations of the 5th Pay Commission and implemented them. Public sector undertakings had been advised to decide the same at their own by keeping their financial position in mind.

He said that HP State Electronics Development Corporation which was under cumulative losses to the tune of Rs. 4.14 crore in the year 2004-05, had emerged out of the red and earned a net profit of Rs. 23 lakh in 2008-09.

The corporation had entered into the open marketing of the soft and hard wares and diversified its business activities in a strict professional manner which had added to its business activities. The government company had carried out a business of Rs 34.21 crore till November, 2009, which was likely to cross the figure of Rs. 40 crore by the end of current financial year.

From its commercial activities the corporation was estimated to earn an profit of Rs. 1.05 crore during current financial year,â€ said Dhumal.

The corporation has been marketing electronic products not only to the government offices but to the individual customers as well who were benefitted with quality product purchase and economical prices. For students they have also provided low cost laptops of branded companies, he said.

Rajender Singh Negi, MD of the corporation said that their retail outlet on The Mall was instrumental in open marketing of the electronics products. He said that after sale service were being accorded priority so that the credibility of the organization was maintained.

To expand its business efforts were being made to rope in HP University and Technical Institutions in the State to subscribe to the programmes launched by various companies for extension of educational facilities to their students through internet facilities. He said that the Corporation was keeping itself updated about the global trends in electronics to adopt the same for diversification of business activities.

Ajay Tyagi, Principal Secretary Finance, Subhashish Panda, Managing Director, HP Tourism Development Corporation and other members of the Board were present in the meeting.