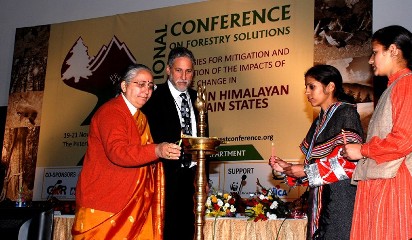 Shimla: Global warming models project a temperature rise of 4 to 5 degree Celsius over north western India by end of the century which would have devastating impacts on existing vegetation across the Himalayan states of Jammu & Kashmir, Uttrakhand and Himachal Pradesh stated DH Ravindranath, a leading scientist.

DH Ravindranath, the noted scientist from Indian Institute of Science, Bangalore speaking to select media after a presentation at the two-day National Conference on Forestry Solutions, said the focus in the Himalayan states should be on adaptation rather than mitigation.

The British model from Headly Centre on global warming when applied to India projects a very high level of impact in states like Himachal that cause temperatures to rise by as much as 5 degrees Celsius by the end of the century and would seriously affect forest cover, composition of forests and bio-diversity, he said.

Over 50 percent forest in Himachal vulnerable to climate change and likely to experience change and as high as 1/3 to 2/3 of the existing species face a risk of extinction. Though the number of rainy days may decrease but the rain intensity could increase causing heavy losses, he added.

Climate change should be an essential ingredient in framing future polices be it related to agriculture, forestry, hydropower, watershed management or irrigation, he said. Development projects should only be approved if they incorporate impacts of climate change into their proposals, he added.

Counting cement industry as the largest contributor to carbon dioxide (CO2), Ravindranath said the industry in Himachal left a large carbon imprint not just because of road transport involved but also the process of clinkerisation of cement from limestone released a large amount of CO2 when calcium carbonate was broken down in the industrial processes involved.

Earlier Steven Hamburg, chief scientist Environmental Defense Fund, Massachusetts, USA in his presentation concluded that natural regeneration of forests over plantations had attained better results in parts of USA after the pressure causing deforestation had subsided. 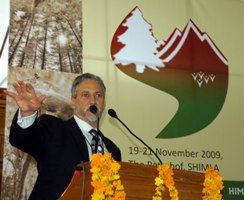 However he said that the regeneration had succeeded as there was lesser incidence of forest fires in those regions. â€œForest fires is a social problem and people need to be considered when developing forestry projects for balancing carbon issues are taken up,â€ said Hamburg.

Jayant Sathaye, senior scientist Lawrence Berkeley National Laboratory, Berkeley USA, in is presentation on Global REDD program and the challenges, while stressing on the need to reduce carbon emissions said that few countries had data on forest degradation and like Chile where it was available it showed that it was a major source of emissions

REDD policy and program design Sathaye said it objective was dDevelopment of a set of policies, programs and projects vetted with key stakeholders that proposed to achieve REDD and other benefits.

The system for REDD payments and benefits distribution is to ensure that adequate compensation benefits reach the deforesters, he said.

She said that adaptation strategies needed to ensure a balance between demand and supply of forest products.

Architect of future climate regime should aim for instruments that maintain climate interests within development choices. In the forestry sector, opportunities for linking mitigation and adaptation exists in afforestation and reforestation projects, said Swarup.

Avay Shukla, additional chief secretary forests, stressed upon the need for greater participation of the communities in forest conservation.

Proposing the need for a separate forest Policy for the Western Himalayan region, Shukla said that a working plan for nurseries was needed to revamp the forest management practices.

Forests should no more play standalone role and instead actively involve itself in all environment protection activities, he said.

Welcoming the dignitaries, Vinay Tandon, principal chief conservator of forests, presented a outline of the three-day conference and details of the deliberations being held.