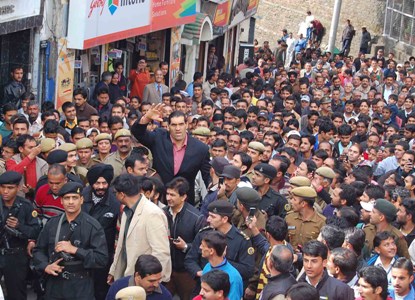 Shimla: Popular wrestler The Great Khali Tuesday described Sachin Tendulkar as ‘India’s pride’ and surprised everyone by singing a Hindi film song in praise of the cricket legend.

‘A batsman like Sachin Tendulkar is India’s pride. He is a legend. I am his diehard fan,’ he said.

The Great Khali arrived in this Himachal Pradesh capital late Monday and is slated to attend several functions.

Recovering from a knee surgery, Khali is currently pursuing an alternative career in films.

‘I am presently focusing on movies. I have signed two more (Bollywood) movies and one is releasing this month,’ he said.

Born Dalip Singh Rana, Khali grew up in Dhirana village, some 200 km from here. He is one of the tallest WWF wrestlers at 7 feet 3 inches and weighs 190 kg.