Tel Aviv: The Israel Government has offered to sign Memorandum of Understandings (MOUs) with Himachal Pradesh for water management and renewable energy.

This follows the keen interest shown by Prem Kumar Dhumal, Chief Minister and the team who are on visit to Israel to study irrigation and polyhouses technology so as to replicate in Himachal Pradesh. It is pertinent to mention here that some of the States from USA had also signed MOUs with Israel in these two vital sectors. 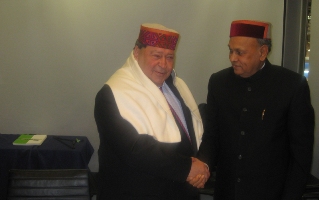 The nine companies which gave presentation to the team from Himachal Pradesh yesterday have also shown their eagerness to tie up with Himachal Pradesh Government for sprinkler and drip irrigation.

Chief Minister Dhumal accompanied by Principal Secretary, Irrigation Narender Chauhan, Secretary, Ram Subhag Singh and Director Tourism Arun Sharma who are on a visit to Israel these days to study the agricultural and irrigational practices in vogue in Israel which is considered one of the best in the world today undertook field visit to apprise themselves about the system and techniques being adopted in that country.

Chief Minister and team saw polyhouses and irrigational system in the farms and also saw the apple orchards. Israel is producing quality apple at the height of 3000 to 3500 feet and productivity was 40 to 45 tonnes per hectares. One peculiarity is that fertigation is being done by way of drip irrigation and use of sprinkler was being made to stop the frost. 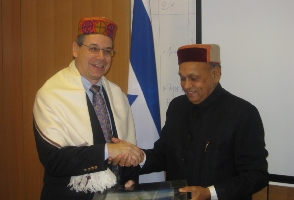 Dhumal who was impressed with the system and said that these would also be replicated in Himachal Pradesh to benefit the farmers and fruit growers of the State.

He said that this system would also go a long way in raising production besides quality of the farming yield and strengthen the economy of the farmers.

The production of the apple in lower belts in case the experiment of Israel succeeds will benefit the people of maximum parts of the State, he added.