Shimla: Given the low consumption of steel in Himachal Pradesh, the steel ministry in collaboration with Steel Authority of India Ltd (SAIL) plans to involve small entrepreneurs in increasing steel consumption in the hill state. 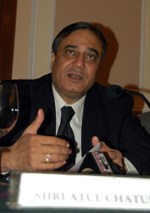 Union steel secretary Atul Chaturvedi at a media conference said that compared to a national per capita average consumption of 46 Kg, the consumption in Himachal was no more that 16 Kgs of steel per person.

He disclosed that after holding a high level meeting with the state government officials it was decided to constitute a three member committee consisting of an executive director from SAIL, director industries Manoj Kumar from Himachal and an CII representative to devise a strategy for increasing consumption of steel.

He added that seven dealers in Shimla, Solan, Sirmour, Hamirpur, Mandi, Una and Kullu had been registered with SAIL who would get direct supply for boosting consumption.

There was a demand for transmission lines as many hydropower projects were coming up in Himachal and likewise there was demand for large diameter pipes for supplying water.

The secretary also disclosed that an investment of about Rs 90 crore is being made in setting up the Kandrori steel processing plant in Kanga district that is likely to come into production three years later.

The process of setting up another similar plant at Nahan in Sirmaur district was on and the state government had shown SAIL some sights where the steel processing unit could be set up.