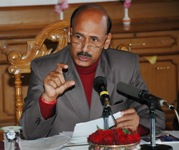 Shimla: For substandard work carried out on a new Shimla water supply scheme the Himachal government has penalised two contractors even as one executive engineer and two junior engineers face prosecution over anomalies allegedly committed in execution of the Drabala road project, Ravinder Ravi, minister for irrigation and public health (IPH) stated today.

Speaking at a meet the press program, the minister said that substandard material used in laying of the Rs 78 crore Giri water supply scheme for Shimla had attracted penalties on two contractors with Rs 57.85 lakh fine being imposed on Solan based Hill Construction and Engineering company and another Rs 3.8 lakh fine imposed on Ajay Kuthiala, another contractor on the project.

About the inquiry on an expenditure of Rs 1.62 crore incurred on a 1.5 Km Sahal-Drabala road in Mandi, the track for which was laid by British engineers, Ravi said that IPH department had accorded prosecution sanction against the engineers whose involvement was found in the project. The engineers who face prosecution have on affidavit claimed that they were under political pressure to clear the expenditure, he added.

The anti-corruption and vigilance bureau has completed the investigation and would soon put up the case in court to prosecute the engineers found involved in inflating the expenditure for the road.

About the delay in commissioning the Shimla water supply scheme, the minister said that the pervious government hand intended to start operating un-completed scheme two years ago whereas even now another Rs 80 lakhs needs to be spent to re-lay a pipeline between Dhalli and Sanjauli and stop leakages. This amount was only approved last Friday and an expenditure of Rs 68.87 crore has been incurred on this scheme, he added.

To provide long term water needs for the growing city, a consultant has put an estimate of Rs 1350 crore for the proposed Pabbar river gravity water supply scheme, said the minister. We intend to put this project before World Bank for funding purposes, he said.

About providing quality drinking water in schools, the minister said that Rs 1.56 crore was being spent on installing and managing aqua-guard water purifiers in 906 schools, tender for which were recently awarded to a Gujarat based company. The program would be extended to all schools which number over 15,000 at a an cost of Rs 50 crores, he added.

To meet water shortages, in a two year period about 3500 hand pumps had been installed, of which 1986 were in the dry zone. In all there were 18742 hand pumps installed and another 3000 would be drilled soon, said Ravinder Ravi.