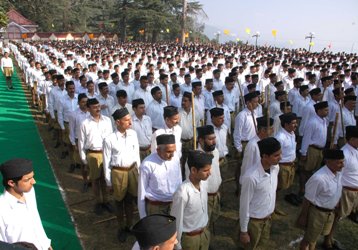 Shimla: Given the internal and external security environment, RSS chief Mohan Bhagwat asked cadres to prepare the nation to face challenges ahead as the very essence of cultural identities and moral values, which were the ethos of Hinduatva, were threatened under globalization.

Addressing a gathering of Swayan Sewaks that was open for the public also at Hotel Peterhof, Bhagwat said one did not need expert opinions to realize that relations with the neighbouring countries of Pakistan, China and Bangladesh were those of distrust, which were a constant threat to the nations security. 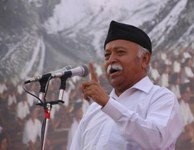 To maintain its economic growth China toes the lines of peace with neighbours, he said, but its designs on Arunachal Pradesh and plans of diverting the Bharmaputra were not friendly actions of a neighbouring country seeking maintaining of peaceful relations.

He opined that US was playing a double game in South Asia by allying with Pakistan, which has been fermenting trouble in Kashmir and other parts of the country and at the same time to balance Chinaâ€™s growth as a superpower was allying with India.

He said that the borders of the nation were not secure. Terrorist based in Bangladesh, a country where terrorist camps targeting India are known to exist, were frequently using loopholes along the porous borders to strike India, he said.

Emphasizing on the need of holding onto unity under diversity, he said that it was the very foundation of the nation, something that Hinduatava advocated.

Globalization was turning out to be a melting pot in which cultural identities were being eroded and moral values were being degraded, he said. Not just our country, but even the western societies were confronted with these problems, he added.

To respond to the threat from globalization, MNC and monopolistic tendencies, the nation needed to be prepared from within as Indian values can provide solutions to global problems, he said.

He said that when all religions believed in oneness of God, why inducements were being used to obtain religious conversions. Opposing the â€˜Vande Mataramâ€™ – a song in honour of the motherland, will not strengthen the nation, he added.

Distancing RSS from being counted as a para-military organization or having affiliations with any political party, he said â€œRSS does not oppose anyone, does not impose fear on anyone nor does it fear anyone.â€

Earlier, Tilak Raj Mahajan, a former DGP Himachal who was the chief guest in his address pointed out that globalization â€“ internet was threatening national boundaries. Values were eroding and RSS needed to consider its role in faces the challenges ahead, he said.