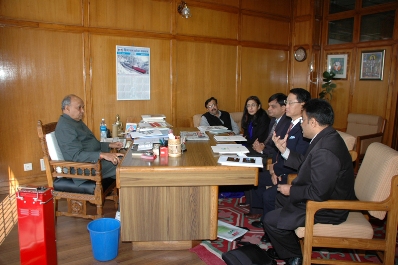 This was revealed by chief minister Prem Kumar Dhumal after a meeting with a delegation of Japan International Cooperation Agency, Padeco, Japan today that was led by Louis Berger Group.

S Majumdar, director Louis Berger Group, said that a feasibility study of the entire region would be carried for the proposed project, which would be sanctioned by the Japan International Cooperation Agency on recommendation of the Indian government.

After implementation, local communities would be associated with the project activities who would be caretakers for sustaining the future programs.

He let the visiting delegation know that that green felling of trees had been banned decades ago in the state and the governmentsâ€™ initiative to ban usage of plastics for daily activities was finding support from the people.