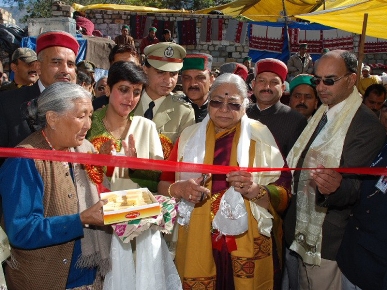 Rampur: The four-day long traditional and historical Lavi fair, which was once, a trade fair between India and Tibet began here today.

Inaugurating the fair,Prabha Rau, Governor said that Lavi fair had its own historical importance and was famous for business activities.

She said that laudable efforts were made to preserve the old traditions and glory of the fair over the years and added that the fair provided an opportunity to market the local products besides a platform for cultural exchange.

Governor inaugurated the Kinnauri market and exhibition put up by various Government Departments and other organizations on the occasion and evinced keen interest in the exhibits.

The governor urged the District Administration to explore market for the products produced by Self Help Groups so that the income of women in the State could be raised.

JS Rana, Deputy Commissioner and Chairman of the Lavi Fair Organizing Committee welcomed the Governor and detailed out the activities of the fair. He also honoured the Governor with shawl, kinnauri cap and memento.

A lot of trading in wool, woollen products, chilgoza, kidney beans and many other items takes place at this fair.

Fresh from having made a killing at the markets from sale of the high value apple crop, most of the Kinnauri men and women are out to indulge in shopping at the variety of stalls that are set up.

Evenings are spent dancing around bonfires, with a traditional band resounding like heavy metal as the dominant sound of brass cymbals and melodious voices of Kinnauri women songs interweave into the folk music.

Men and women interlock in a chain, match steps as the lead dancers with a yak tail embedded into a Olympic torch type of baton swirls, bends and swishes about in a circle.

Tradition has given way to modernity as there are fewer takers each year for this activity but many can be seen thronging the venue of planned cultural evening events, a platform where local talent finds a stage to perform on.

Popular local artists rub shoulders with well known performers brought from elsewhere too add a punch of variety, much to the demand for entertainment among the fair goers.

Times have failed to revive trade links between Satluj valley and western Tibet that were sewn up in a treaty in circa 1681 between the Bushair royal house and the 5th Dalai Lama of Tibet and the Lavi fair at Rampur was started to mark the treaty.

Back then horses and swords were exchanged between Raja Kehar Singh (1696-1753 A.D.) of Rampur Bushair State and the Dalai Lama as a token of friendship.

It was pledged to hold the trade fair each autumn till the time Satluj went dry or crows turned white.

Thawing of Indo-Chinese relations did lead to opening of Shipki La as a trading point in the mid 1990’s on the Indo-Tibetan border in 1994 but even after 15 years Lavi has failed to regain the charm that prevailed before the 1959 Chinese invasion of Tibet.

Ninety year old Tikkam Negi from Nichar recalls, “Out shopping at Lavi used to be an unbroken tradition.”

Tucked away in a small corner at the Lavi grounds, one can still comes across relics of the past where small traditional stalls selling Tibetan or Kinnauri artifacts for sale are visible.

Two relics of traditional Lavi survive, one legal and the other is fiercely contained by the law enforcing authorities.

Buying and selling of horses still holds the attraction it did when motor roads had not penetrated the valley.

Chamurthi breed of mountain horses is much sort after and many from far off places come looking for this sure footed animal used for moving men and goods in high mountainous and snowy tracks.

Gambling, a tradition at Lavi, is still carried out but in hidden places to hoodwink the law forcing agencies out in great numbers so as to contain it.

Satluj valley folklore narrates many tales of paupers having come out rich men after a lucky day at the fair and many returning poorer to live through a harsh winter ahead.