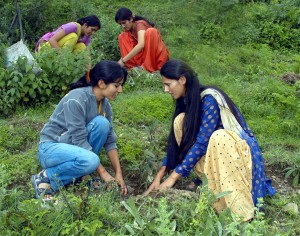 Shimla: As impacts of climate change on shifts in seasons becoming noticeable, the forest department has instituted a study to mark the shift in tree line in horizontal zones as well that is moving higher into alpine pastures so as to document the flora changes taking place in the north-western Himalayas.

Speaking about the study constituted, Vinay Tandon, principal chief conservator forest said that though trees flowering out of sync with the season that they are due, movement of bees, changing in breeding seasons of birds were all being noticed and reported but to document a shift in the climate zone taking place, the study about shifting tree line has been instituted.

In the north western Himalayas, the transitional tree line starts at 10,000 feel altitude, said the forester, and by 12,000 feets changes to shrub and alpine pasture vegetation.

Horizontal shifting of trees and accompanying flora indicates changes in precipitation patterns where as tree line moving higher in the transition directly relates to warming in the zone, he said.

As trees that used to grow at a particular altitude are now becoming at higher altitudes, this study would help to document the changes taking place.

More than mitigation measures to check climate change, findings from the study would help in adopting adaption strategies in facing the changes coming about, said Tandon.

Another change being noticed was perennial streams fed by glaciers turning into rain fed seasonal ones, he said.

Senior scientists RK Sood, who is a joint secretary with state council for science, technology and environment, reacting to changing weather patterns said that though season shifts were noticeable but one needed a longer term study to ascertain whether it was only a cyclical change or a progressive pattern in global warming.