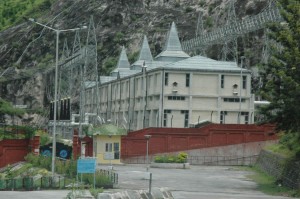 Shimla: Having declared a undivided dividend of Rs 320 crore for 2008-09, SJVN, the centre-state sector power generating company today handed over Rs 157.50 Cr dividend to the union government who hold 75 percent equity in the public company.

SJVN spokesman VK Verma said that the final dividend cheque was submitted to HS Brahma, secretary power by HK Sharma, CMD of the public utility company in presence of other senior government official and other SJVN directors. An interim dividend of Rs 82.50 crore has already been paid to the union government, he added.

The Himachal government which has a 25 percent equity in the company earns a Rs 80 crore dividend for the year.

Besides HK Sharma, SJVN directors RS Katoch, and KK Garg, were also present on the occasion.

Director (Finance) and Shri S.P. Singh, GM(CMC) from SJVN were also present on this occasion.