Shimla:The Bhartiya Janata Party has taken a strong exception to the comment made by Union Steel Minister Virbhadra Singh in which he has equated the BJP with Pakistan. 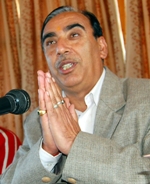 Addressing a press conference here on Tuesday State Horticulture Minister Narendra Bragta said the frustrated Congress leader who is perturbed after the intra party conflicts is forced to give such irresponsible statements.

After the denial of Congress ticket to his wife for the coming by- election in Rohru a visibly upset Virbhadra Singh had said yesterday that a victory of BJP here would be just like as if Pakistan, an enemy, hoisting its flag on some Indian territory.

The State BJP President Khimi Ram also said the senior Congress leader is unfortunately not having any faith in the multi-party democracy of this country. While condemning the feudal mindset of Congress leader he said that BJP is a pure nationalistic party having a modern outlook.

He said the latest policy of discouraging dynastic rule by Congress General Secretary Rahul Gandhi has shattered the dreams of Mr Virbhadra Singh.

Cabinet Minister Narendra Bragta said the BJP victory in Himachal by-elections is a foregone conclusion now and the people would positively vote for the development works undertaken by his government instead of voting for a particular feudal family.

On being asked about the latest emotional outbursts of Mr Singh and manhandling of PCC president in Rohru by some Congressmen, the BJP leader who also belongs to the same area said, â€œit is the beginning of end of Congress party in its own strongholdâ€.