Wellness expert and psychologist Swati and Utsav of My Himachal, NGO conducted a three day Stress Release and Positive Motivational Wellness Camp for the 2nd Reserve Police Battalion at Sukoh, Dharamsala on 23 – 25 October, 2009. 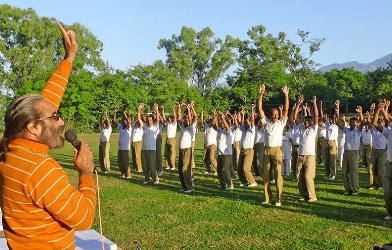 Dharamsala: Entering the premises of 2nd Indian Reserve Battalion at Sukoh, Dharamsala normally is otherwise a silent, solemn and serious affair. Letting down their guard, it was a change from routine between 23-25 October as the campus was transformed into a celebrative and energetic venue where Himachal Police personnel found themselves connect up with simple but powerful and effective stress release techniques.

The lessons imparted by specialists Swati and Utsav invoked Positive Motivation through synergies with Yoga, Dance, Music and Positive Affirmations.

The positive and life affirmative tips learnt in the 3 day Stress releasing And Positive Attitude Workshop would go a long way in serving the State and its people in a more effective and humane manner. The highly praised and successful workshop was Conducted by Team of Expert Psychologist and Wellness Consultant Swati Kumar along with Motivational Speaker and Stress Release Expert Utsav Arora- under the aegis of Himachal’s own NGO – My Himachal!

The camp had excellent and overwhelming positive feedback from the male and female participants, many of whom requested it to be either extended for atleast 7 days or made a regular part of their regular regimen. Lady Police Members like Kusum Rani and Amrita said they were tensed and stressed that they were willing to resign from the force. But due to the very effective tips and life positive camp by Swati and Utsav they are feeling at home and happy in just 2 days. Many felt such camps should be held for all the senior and junior colleagues as well as it helps them being a better human and police personnel thus serving the People and Official duties more effectively and sincerely.

The visiting IG, Himachal Police, Mr. D.P. Sharma was so happy and enthralled to see the activities and results during his interaction with ‘My Himachal’ Experts Swati and Utsav, that he suggested and recommended more camps in various parts of the state. Also present were My Himachal Members- Ms Anandi, Anish Joel and General Secretary Shivani Malhotra.

Ms. Swati, who is an expert on the modern and progressive techniques of Stress release For Police as well as Education Sector, said that Police are under triple stress of performance due to the expectations of Public, Media, Governments and their own Departmental procedures and work. On top of this the constant travel and transfers without any benefit of leave, their mental and family life is always under duress and stress thus hampering them to work more effectively for public and official work. Also due to the constant negative TV programs and that encourage aggressive and negative competition, people are letting go and losing their own creativity and pursuit of self excellence and falling prey to instant gratification of power hungry ambition. Police is also part of us and as human as other humans in society so need regular expression and time out to relax and recharge their energy and positive motivations. Shri Utsav mentioned that modern society and education has a big imbalance as the greedy race to accumulate more and more leaves one finally limping on one leg because the connection with self and own natural environmental surroundings is missing.

They used time tested techniques and from the Eastern Wisdom from Masters, Like Patanjali’s Yoga Sutra, Buddha, Osho, Krishna and Nanak’s Bhakti Keertan as well as tested modern scientific and psychological Techniques. IN Addition to Police and Law enforcement agencies, Swati and Utsav are also extremely in demand and invited to workshops and talks on people developmental skills as well as stress release workshops in other sectors like corporates and educational institutes. This gives them a huge experience and expertise in these multidimensional fields and all that is available for the people of Kangra and Dharamsala. Apart from Human Resource development, they are also part of senior team of ‘My Himachal‘- which is also working with an objective to protect out natural resources and wealth by doing important work in the field of Environment protection and Cleaning of our Rivers and Mountain Wealth.

Back at the Indian Reserve Battalion camp in Sukoh, Dharamsala, It was a site to see the normally tired and grumpy Police personnel of various ranks let go of their normally serious and complaining attitude and become one celebrative and dynamic and rejuvenated happy family of Himachal Police in the service of the common man.

Most Participants were seen very sad that the camp will be over in 3 days and wanted a repeat of such camps in various battalions at regular intervals. They promised that The positive and life affirmative tips learnt in the 3 day Stress releasing And Positive Attitude Workshop will be implemented by all of them and would go a long way in serving the State and its people in a more effective and humane manner. The teamâ€™s motto was evident in practice:

Lets Leave this world a little more joyous and beautiful than we found it. 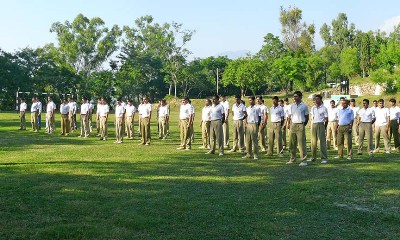 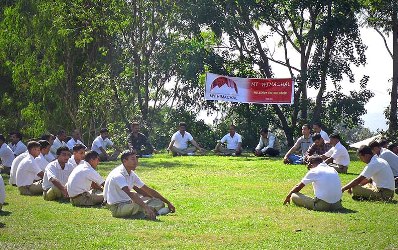 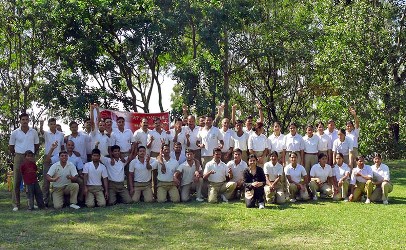