Institute on glacial studies to be set up
Scientists stress upon mitigation, adaption programs to tackle climate change

Shimla: Sounding a warning about threat to Himalayan ecology because of glacial melt and resultant climate change that would impact livelihood patterns for millions of people, scientists gathered here deliberated upon mitigation process and adaption needs. 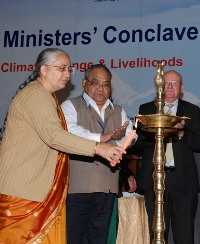 Highlighting the meets importance, Akhilesh Gupta, advisor and coordinator for climate change with the union government disclosed that the prime minister was looking forward to the outcome of the conclave.

Talking to media persons later, he said that climate change hovered around glacial melt in the Himalayan region was being used by developed countries to stall sustainable development activities. â€œThe situation is not as grave as it is made out to be,â€ he said.

He also revealed that the union government plans to set up an institute on glaciology in any one of the five Himalayan states of Sikkim, Aurnachal Pradesh, Uttrakhand, Jammu & Kashmir and Himachal Pradesh.

Andreas Schild director ICIMOD, in his presentation on Himalayan eco-systems stated that â€œsustainability of eco system services in the mountains will require new instruments and out of the box thinking in order to reduce vulnerability.â€

CV Sangewar, director Glaciology, geological survey of India, Lucknow in his paper on snow and glacier studies held that â€œthe task of compilation of glacier inventory of entire Himalaya has been completed under ‘Inventory of the Himalayan Glaciers’ and was released recently.

Of the 9575 glaciers compiled in the inventory in Indian part of Himalayas, maximum concentration of glaciers and glacierised area was in Jammu and Kashmir, followed by Himachal Pradesh, Uttarakhand, Sikkim and Arunachal Pradesh.

Madhu Verma in her brief paper on Economic Valuation, Green Accounting and Payment for Environmental Services held that â€œundervaluation of forest resources in India was causing immense losses to the sector and the economic system.

Most natural resources are taken as â€œfree gifts of nature,â€ says Verma. Concept of payments for ecosystem services has raised expectations among stakeholders that ecosystems can be conserved through popular payments to ecosystem service providers rather than through unpopular measures of command and control.

The basic logic is simple: those that provide ecosystem services by foregoing alternative uses of the land should be compensated by the beneficiaries of that service. As forest ecosystems of Himalayan states play a very significant role in both mitigation and adaptation of climate change, the compensation can come in the shape of carbon credits or REDD payments.

Anil Kulkarni from space application centre (ISRO), Ahmadabad, in his paper on monitoring of Himalayan snow and glacier cover found that â€œinvestigations suggest that areal extents of 1317 glaciers were 5866 km2 in 1962 and 4921 km2 in 2001/04, showing an overall de-glaciation of 16 percent. Besides, seasonal snows cover was being monitored for the 32 basins.

MP Sah from Wadia Institute of Himalayan Geology, Dehra Dun (WIHG) in his paper on Snow and Glacier Mapping let the conclave know that â€œthe first glaciological project carried out by WIHG during 1985-1989 was on the Chotta Shigri glacier in the Chandra Bhaga basin of Lahul and Spiti district of Himachal Pradesh