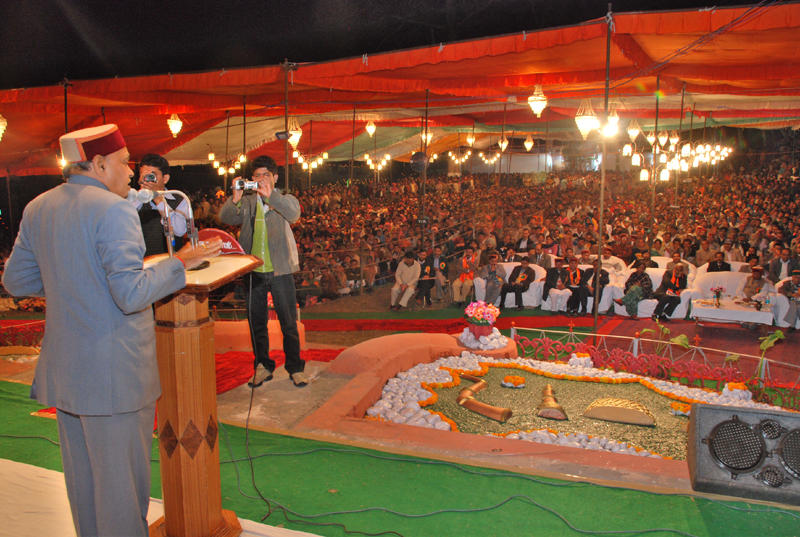 He said that Rs. 15 crore Renuka Tourism Development Circuit had been envisioned for sustainable development of Renuka area and posed for funding to Government of India and additionally Rs. 12.97 crore had also been sanctioned for various developmental activities is district Sirmour. He said that one more private university would be opened in district Sirmour with a view to give boost to quality education in the State. He assured the people that sincere efforts would be made to rehabilitate the people who would be contributing significantly to pave the way for construction of Renuka Dam.

He stated that Rs. 300 crore NABARD funded ‘Doodh Ganga’ scheme had been launched in Sirmaur, Solan, Bilaspur and Mandi districts in the first phase. He said that about 50,000 Women Self-Help-Groups would be benefitted by availing low interest rate to start their own dairy farming for self-employment and reliance.

Dhumal said that agriculture needed to be given priority with a view to improve the economic conditions of the people living in rural areas. He said that rural development would automatically result into retaining the migration in villages, where best of the basic amenities would be created. He said that Road, Education, Health, Self Employment, Self-Reliance and Self-Respect was on the top agenda of the State Government.

He paid floral tributes to the founder Chief Minister of the State Late Dr. Y.S. Parmar, who envisioned a prosperous and self-reliant Himachal and hailed from Sirmour district. He also inaugurated the exhibitions put up by various Government departments, public sector undertakings, NGOs, SHGs, voluntary and other organisations and took been interest in the exhibits displayed therein.