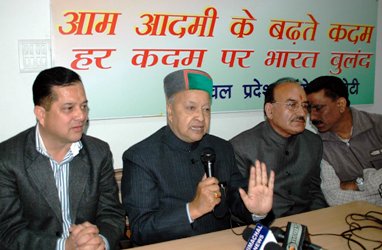 Shimla: Even though he has represented Rohru for five terms as a chief ministerial candidate, a visibly annoyed Virbhadra Singh, the union steel minister here stated, â€œit would be most unfortunate if BJP is able to win the congress fortress in the bye-election.â€

In the presence of state congress president Kaul Singh, he said â€œthe onus of winning the prestigious Rohru seat lies with the state party president and Vidya Stokes, the congress legislature party leader, as he can only seek votes in the constituency as an ordinary congressman.â€

â€œIt will be for the first time that I will be seeking votes for a congress candidate in Rohru,â€ he said.

Making a oblique reference towards the party factionalism which was responsible for denying his wife Pratibha Singh the ticket for the November 7 bye-election to the Rohru seat, he said â€˜If the congress candidate wins, it should not be counted as a win for others and if he loses it should not be considered a loss of Virbhadra Singh.

â€œWhether the party wins or loses, it is a collective responsibility for the party,â€ said the former chief minister.

On being questioned as to why the party denied a ticket to Pratibha Singh, he said, â€œI donâ€™t knowâ€, but quickly added, â€œhe was told that the party had framed a new policy whereby kin of leader would not be given tickets.â€

â€œIâ€™m glad that the party has framed such a policy and started implementing it from Rohru constituency,â€ he said.

Welcoming Davender Busheri, a BJP rebel who was denied the ticker for Rohru into congress, the union steel minister said that he had taken out time from his responsibilities as a union minister to spend 5 days campaigning for the congress candidates in Jawali and Rohru constituencies.

Comparing a possible loss in Rohru to that of India losing out a strategic fortification position to Pakistan, Virbhadra said that should BJP win a seat, where the saffron outfit has lost every election it has contested, would be a sad day for congress in Himachal.

Earlier Kaul Singh Thakur speaking at the same venue said that BJP was split wide open in both the constituencies exemplified by Davender Busheri joining congress party in Rohru and Madan Lal Sharma, a brother of BJP MP Rajan Sushant, deciding to contest against the party candidate Baldev Raj Choudhary in Jawali.