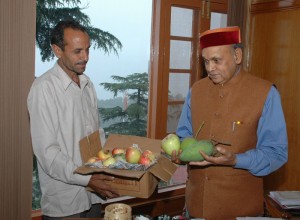 State’s horticulture scientists would be carrying comprehensive researches to motivate farmers of the lower areas of the state to cultivate and plant the apple following the lead set be Hari Man Sharma of village Paniyala in Ghumarwin tehsil, district Bilaspur who had successfully cultivated apple, mango and litchi in the same farm and changed the whole notion of farming in the lower belts.

Chief Minister congratulated Hari Man Sharma and announced that the state government would soon launch a special campaign to motivate the farmers to diversify their traditional cropping pattern and adopt modern modes while Hari Man Sharma would be the driving force behind the campaign. He directed the state scientists to visit the farmers and motivate them to adopt modern farming and cultivation so that the state was capable to produce varied varieties of fruit, off season vegetable and other cash crops.