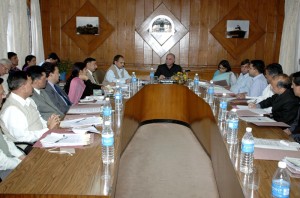 Thakur Gulab Singh, the Revenue Minister addressing the officers of Revenue Department announced that the Central Government has sanctioned additional assistance of 201 crores for Himachal under Calamity Relief Fund as long term measure. The assistance has been released keepig in view the losses incurred due to floods during previous year.

Directing the field officers to hold regular revenue camps, he further said that a three-month long special campaign should be launched for clearing the pending cases of mutation all over the state. Stressing on the preperation of an effective and simpler policy for partition of land, he asked the officers to ensure land ownership transfer formality within 15 days in case of death of landowner. He further said that a land evaluation committee should be constituted at district level under the chairmanship of Deputy Commissioner for proper evaluation of land and to check evasion of stamp duty. Emphasizing on publication of district gazetteers, he stressed on regular refresher courses so as to update knowledge of the revenue officers.