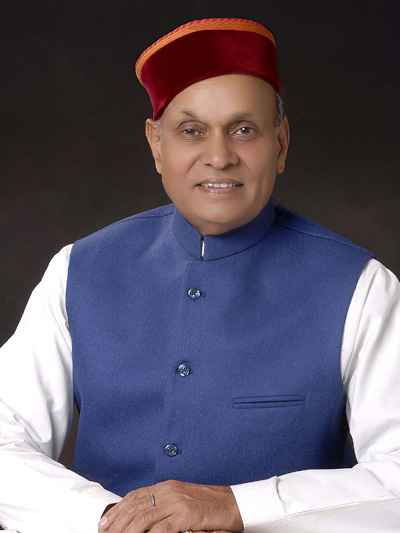 The State during the last 60 years has made unparallel and unprecedented progress in all spheres of development. The mountainous and harsh terrain, once a symbol of poverty and misery, succumbed to the strength and strong will of its arduous people. The unparallel development witnessed during the period could be gauged from the fact that literacy rate which was only 7 per cent in 1948 has gone up to about 86 per cent. Similarly per capita income, which stood at Rs. 240 has reached Rs. 39,819.

State Government has visualised a self-sufficient, self-reliant and prosperous Himachal by the next five years, for which active cooperation of every citizen of the State is solicited. Our Government is dedicated to serve the State and its people with all its strength and sincerity. Power, for us, is only a means of serving the people. It would be our earnest endeavor to make Himachal Pradesh a self-reliant and prosperous State.

April 15 is a red-letter day in the annals of Himachal Pradesh, as it was on this historic day in 1948 that the State came into existence after merger of 31 odd princely hill States. Today, Himachal Pradesh has completed a journey of 60 years, which had been thrilling and challenging, and at the same time satisfying.

The State during the last 60 years has made unparallel and unprecedented progress in all spheres of development. The mountainous and hash terrain, once a symbol of poverty and misery, succumbed to the strength and strong-will of its arduous people. The unparallel development witnessed during the period could be gauged from the fact that literacy rate which was only 7 per cent in 1948 has gone up to about 86 per cent. Similarly per capita income which stood at Rs. 240 has reached Rs. 39,819. There were only 331 educational institutions in the State in 1948, whereas, today about 17,000 educational institutions are catering to the educational needs of students in every nook and corner of the State.

The first and foremost task before the State Government was to bring back the derailed economy of the State on track as it had inherited huge debts to the tune of over Rs. 22,930 crore as a financial legacy from the previous Congress Government. For this, the State Government has decided to put more emphasis on financial discipline and austerity by cutting down unproductive expenses, so that adequate funds could be made available for development works. We believe that every paisa of public money should be properly utilised for the genuine purpose.

The Government is committed to provide efficient, clean and transparent administration by rising above all political considerations. Soon after assuming power, the present Government decided to set up Public Redressal Cells in all the public service oriented departments, right from the lowest to highest level. Corruption was one of the major issues in the elections and we stand committed to wipe it out. It would be ensured that under no circumstances, guilty goes scot-free, whereas innocent would not be harassed.

Roads, education, health, self-employment, prosperity and self-reliance is the resolve of the Government and accordingly, developmental outlay has been increased significantly in the priority sectors like welfare, power, agriculture, etc. It is our endeavor to provide benefits to all the sections of society.

We are committed to fast development of State with socio-economic justice to all. Soon after assuming the office, the State Government raised the daily wages of workers from Rs. 75 to Rs. 100 benefiting 5 lakh families. Social Security Pension has been enhanced from Rs. 200 to Rs. 300 per month benefiting 2,37,250 Social Security Pension holders. Earlier also it was during previous BJP regime that the pension was increased from Rs. 100 to Rs. 200 per month. To promote greater empowerment of women, the State Government has decided to reserve 50 per cent seats in all the Panchayati Raj Institutions and Urban Local Bodies for women. Free travel in HRTC buses for women on Bhaiya Dooj and Raksha Bandhan will be provided.

Rs. 2400 crore annual plan has been fixed for the current financial year, which is Rs. 300 crore more than the previous year. The State Government took a historic decision to earmark plan budget in proportion to the scheduled caste population of the State. Accordingly as against an outlay of Rs. 231 crore during the previous year, Rs. 594 crore has been earmarked under the Scheduled Caste Special Component Plan for the current financial year. The State Government has also decided to bring 2,82,316 BPL families in the unorganised sector under Rashtriya Swasthya Bima Yojna. The beneficiaries would be provided insurance cover of Rs. 30,000 per family on an annual premium of Rs. 750 out of which the beneficiary family would have to contribute Rs. 30 per annum only. New Health insurance scheme has been announced for families below poverty line which would benefit about 3 lakh such families by taking care of their health insurance needs. Insurance benefits under â€œMatri Shakti Bima Yojanaâ€ have been doubled to Rs. 50,000 in case of accidental death and Rs 25,000 in case of loss of one limb. This would cover all families below poverty line. Health insurance scheme component has been introduced for handloom weavers with a view to provide them health insurance cover. This decision would benefit over 20,000 families engaged in weaving profession.

Government has decided to provide 3 per cent reservation to physically challenged persons in Himachal Pradesh Administrative Services. A new scheme has been started for allotment of plots and sheds to physically challenged entrepreneurs with a view to develop entrepreneurship amongst them to explore self employment ventures in different enterprises.

A scheme has been introduced for grant of pre-matric scholarships for economically deprived students belonging to Other Backward Classes (OBC). About 10,000 OBC students would be benefited at an estimated cost of Rs. 90 lakh per year. On an average, every student shall get a benefit worth Rs. 900 per year.

Dr Bhimrao Ambedkar Bhavans would be constructed in every assembly constituency at a cost of Rs. 10 lakh each. Government has earmarked Rs. 6.80 crore for the purpose during the current year.

Education plays a pivotal role in empowering and enlightening any society, therefore, top priority is being accorded to this vital sector. The previous Government opened large number of educational institutions without making adequate budget provisions or creating requisite infrastructure. With a view to meet the shortage of teachers and create required infrastructure for educational institutions, the State Government has decided to fill up 18000 posts of teachers during the current financial year. In order to improve academic atmosphere in educational institutions, the Government has also banned political and social functions on working days in school premises. Students and teachers will not attend any political, public, social function during working hours. Yoga education would be started in educational institutions and 100 posts of Punjabi and 100 posts of Urdu language teachers have been sanctioned for 100 each identified schools in the State. A Central University shall also be established in Kangra district.

Special emphasis is being laid on providing quality health services to the people. With this in view, the State Government has decided to appoint 250 doctors in order to meet the shortage of doctors. Similarly, 1000 posts of nurses and para medical staff would be filled up soon. Prescription Slip Fee has been abolished in all health institutions. This would benefit all 13 lakh households in Himachal Pradesh, particularly the poorer sections of the society. In order to strengthen the health services, the State Government is planning to open 250 Ayurvedic clinics in primary health centres, 70 clinics in community health centres/rural hospitals and 10 wards in Regional Hospitals/Medical College Hospitals. Government has also decided to open medical colleges in Mandi, Una and Hamirpur districts in private-public partnership.

Agriculture ranks very high in Governmentâ€™s priorities. A plan outlay of Rs. 664.81 crore has been kept for agriculture, rural development and irrigation sectors which is 28 per cent of the total plan size. Government has decided to provide free soil testing facilities to the farmers and they would be suitably advised by the Agriculture Department with regard to the optimum cropping pattern. The State Government has also decided to pay 50 per cent premium under agriculture insurance scheme. Procurement price of milk procured by MILKFED has been raised by Rs. 2 per litre. This would directly benefit the farmers of the State by way of remunerative price for their milk.

National Rural Employment Guarantee Scheme has been launched in all the districts of the State, thereby ensuring a minimum 100 days employment in a year to each job card holder. Under this scheme stress is being laid on rain water harvesting, minor irrigation, land improvement and rural connectivity.

Roads are the lifelines of the State. High priority is being accorded to the roads and infrastructure sector including development of hydro-power in the State. Roads, bridges and transport connectivity has been given impetus with a total outlay of Rs. 374.15 crore, which is 16 per cent of the total plan size. All the left out 460 Panchayats will be linked with roads during the year 2008-09 by using the State resources as well as the funds to be received under the PMGSY. Mukhya Mantri Gram Path Yojana has been reintroduced with a provision of Rs. 10 crore.

The hydro power is emerging as a powerful mechanism for speedier economic growth of the State. Outlay of Rs. 328.24 crore has been kept for developing the Power Sector, which shall be about 14 per cent of the plan size. This shall give thrust to hydro-power development in the State. It has been decided to invite open bids for execution of power projects above 5 MW with a view to bring transparency in allotment of power projects. All the identified 12 power projects which have more than 100 MW capacity and are yet to be allotted, shall be allocated by the end of the year 2008 by following the transparent open bidding process.

Nature has bestowed Himachal Pradesh with immense tourism potential. Lush green meadows, whispering brooks, pristine shrines and healthy environment are few attractions which make Himachal Pradesh one of the most favoured tourist destinations. Adventure and rural tourism is being encouraged in new and rural areas of the State.

A high level Committee has been constituted to frame new transfer policy for the employees. Interim Relief of 5 per cent has been released to Government employees and pensioners from November, 2006 which would entail burden of Rs. 300 crore per annum on State exchequer. State Government is also committed to implement recommendations of 6th Pay Commission. The Government would ensure at least 70 per cent employment in all the industrial and other projects to Himachalis. A Monitoring Cell would be established in the Chief Ministerâ€™s Office to monitor its compliance.

The State Government has succeeded in amicably resolving various inter-state issues with Punjab which includes construction of Chandigarh-Baddi road by June 2009, priority construction of Shah Nehar Project, linking Baddi with proposed International Airport Mohali with Super Highway and construction of Ropeway between Shri Anandpur Sahib and Shri Naina Devi Ji. The State Government has also succeeded in pursuing Punjab to provide 300 MW power during winter to the State, whereas State would provide equal power to Punjab during summer.

State Government has visualised a self-sufficient, self-reliant and prosperous Himachal by the next five years, for which active cooperation of every citizen of the State is solicited. Our Government is dedicated to serve the State and its people with all its strength and sincerity. Power, for us, is only a means of serving the people. It would be our earnest endeavour to make Himachal Pradesh a self-reliant and prosperous State.

With kind permissions from Organiser.