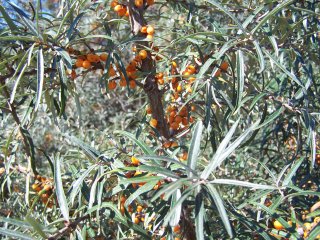 PALAMPUR: Seabuckthorn, locally known as Charma has attracted global attention of scientists, environmentalists , famous industrialists and various other agencies due to the presence of vitamins and many other substances in its fruits, leaves and bark. The medicinal values of this plant were discovered by the Tibetan doctors in early 8th century in Tibet. However, the industrial utilization of this important plant was started in former Soviet Union, when Russian scientists discovered its rich vitamins values in 1940.

With the opening of Soviet Union in early 1980, the Chinese spies discovered in USSR that Seabuckthorn food products and drugs help in improving the immunities of astronauts , who travel by rocket in higher spaces in the deficiency of oxygen. Later a Chinese scientist translated a Russian book on Seabuckthorn in Chinese language and consequently active research work on various aspects of Seabuckthorn began in several universities and other institutions of China. Developing her own indigenous technology as well as transferring the Russian know how today the China has established over 300 industries based on Seabuckthorn in 19 states, producing range of health protection food products, life saving drugs and cosmetics. Learning from the experiences of Russia and China, active research and plantation of Seabuckthorn orchards was started in more than 40 countries in Europe, Asia and America with short span of last four-five years. Besides, number of other small countries have also taken up research on this plant.

In India , although the anti-cancer activity on Seabuckthorn was discovered in early 1971, by an Indian scientist. It is unfortunate that since then there is no follow up despite the fact that this plant is available in India in abundance. Seabuckthorn grows naturally in river side and slopes in Lahual and Spiti, Chamba , Kinnaur districts and other parts of the state. There is also wild growth of this plant in Ladhak and U.P. hills.

Only in January 1994, India came to know about the great importance of this medicinal plant when a Chinese scientist delivered a note on the importance and high medical values of seabuckthorn, in the first consultation meeting organized by the State Council for Science , Technology and Environment at Simla. Thereafter the state council created lot of awareness about the potential of the Seabuckthorn in the tribal areas of the state. With an aim to develop and protect the Seabuckthorn the State Council of Science and Technology has set up a task force on this plant involving the scientists of the universities of the state. Later the research work on various aspects of the SBT was also taken up in Regional Research Station of HPKVV at Kukamserri in Lahual and Spiti. Nursery and plantation of Seabuckthorn was developed by the scientist here.

It is a high time that the state government and both the universities of the state encourage and give special attention to the scientists working on the research and development of seabuckthorn. State government in consultation with the Vice Chancellors of HPKVV, Palampur and Dr. Y. S. Parmar University for Forestry and Horticulture , Solan , should constitute a high level team of scientists to work on the various aspects of seabuckthorn. There should also be study for the economic utilization of this plant and greening the wild deserts of tribal areas of the state.