Dalhousie had become a full -fledged Hill Station by 1860s. Rajput rulers of erstwhile Chamba State also built Jandhrighat Place as their summer home. A recent proposal to rename it after Neta Ji Subash Chander Bose was shelved by the union government.

The town is full of old world charm and holds lingering echoes of the Raj.  Houses that many Britishers and wealthy Indians, Opting to live in the town, built early last century, maintained these for their summer’s stay. Indians in the town, with a few exceptions, formed the service class. The elites included the cream of Indian Society. It had very marginal effect on the lifestyles of its service population. Even entry of the local people to the Mall was restricted.

Partition caused tension; people of Dalhousie had participated in the freedom struggle with patriotism. Till independence Dalhousie’s population was always on the move. Dalhousie had never existed for itself, it had been built for others to visit and enjoy. It was later that people came with a view of settling down. In 1959, Dalhousie was the first Indian home for many of the feeling Tibetan community which is still vibrant in the town. For a long spell Dalhousie had started giving a deserted look, when people started calling it a ‘dull’ and ‘lousy’ place. In 1980s a ‘Canadians Settlement’ came up during the Construction of Chamera Hydro Electric Project.

Time is a continuum. Mankind has entered into a new millennium with the end of 20th century. Dalhousie has left behind it’s 150th Year of existence. The township is going through a rapid change. The tallest (108 feet) Tricolor in the state, installed on the premises of Dalhousie Public School (DPS), headed by Captain (Dr) G.S. Dhillon, an eminent scholar from Harvard University, USA on October 19 last year, has now become an added attraction to tourists. The first Defence Park was also launched here with huge model of a naval warship named after Sardar Madan Singh , the naval officer who led the historic Royal Indian Naval Mutiny of 1946 that hastened the end of British colonial rule in the country.

People of Dalhousie, who wanted to move out of cities where it became too congested, have started coming back home. The decaying houses, long left to the care of chowkidars, are being renovated and rebuilt; even structures on the Mall have changed. The place has become more of a residency than a holiday resort. This has led to an emergence of a tiny elite. Some are choosing to sell their houses because their children do not have any emotional bondage with the place and have settled abroad; and also because of fear that relatives may try to grab the property they leave to their care.

Dalhousie has a large population of the Army and the Air Force; and other employees. There are people in the hutments and suburbs too, like Lakarmandi is the home for the wood cutters. Tourists have also started descending on this hill. During summers the floating population out numbers the permanent population of the town. Mixed with this diverse population is the local primate population of monkeys and langurs. And overhead and side by are the birds of varied species. 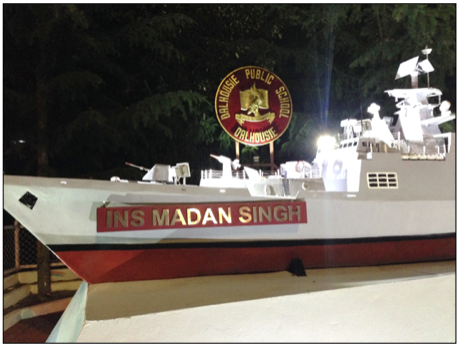 With an influence of the culture of the country folk, multicultural people inherit the place. Hindus, Sikhs, Christians, Buddhists, Muslims, Jains all live in peace and harmony and with a sense of belongingness. A friendly and cordial atmosphere prevails amongst the Paharis, Gaddies, Gujjars, Dogries, Dogras, Punjabis, Kashmiris and Tibetans and all. The interaction has resulted in long-term bonds. It seems Devine hand is discernible anywhere in this beautiful land. Righteous living, following moral, ethical and spiritual values is engrained in this society. There is consciousness for honesty and cleanliness. People seek spiritual sustenance from gurus, who have ripened through meditative practices, in the meditation centers spread over the town. The place has a certain charm and a placid ambience, one may not find elsewhere. Here is a gentle casual atmosphere. People love the charms of this quiet, gentle town. Each village in the vicinity has a rich culture, customs and legends. The politeness and hospitality of the villagers is pleasing.

Dalhousie is a cosmopolitan town. Brits, Belgians, Tibetans, besides the school boarders from different corners of the world grace the place. There is an admixture of the races and the ethnic groups, with a smooth blend of cast, creed and religion. The people have much in common with those in the plains of Punjab except that hill dwellers are farer in complexion. The habitat gives an appearance of a unified group of Indo- Aryans and Mongolians. The society here is a combination of tribal and non-tribal, backward and modernized, civilized and semi civilized; an identity of hills and plains culture in one.

Language is a mix of Hindustani, Pahari, Dogri, Bhattiyali, Chambyali, Punjabi and English, Tibetan and dilects apart. Language is not a barrier either. Rice wheat and maize is the staple food.

It is an eco- friendly township with virtues of hill architecture. There is a judicious mix of low and middle rise buildings, with slanting roof structures, merging with the environs. Solar water heating is optional. There are eco parks and green areas, besides a big wild life sanctuary at Kalatope. Silver oaks, Devdars, Pines and rhododendrons grow in abundance. Different variety of ferns, ivies and foliage, wild flowers, rare and exotic species, which were planted during the British period, add to the flora. People are nature conservationists. 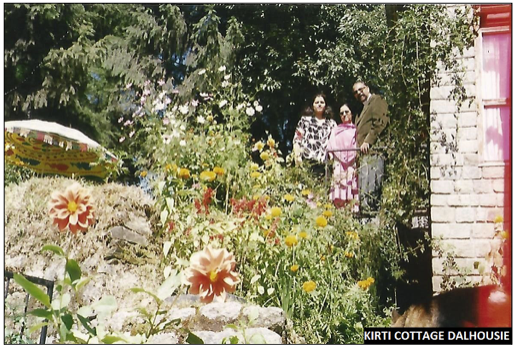 The graceful citizenry of Dalhousie has carved a quality life style. The luxury of space, the openness, fresh air and the sunlight at that height feels just great. Some residential estates are sprawled in areas as big as 20 acres. Multilevel lawns are a nature’s gift. Some old apple trees still bear fruit. Ornamental shrubs and creepers are planted to merge with the wild landscape. Indoor potted plants and fresh flower arrangements enhance the beauty of the stone and panneled wood interiors.  Public flower shows are organised in the season. People love gardening, dahlias, hydrangeas, marigold, chrysanthemums, lilies; sunflowers etc. adore the terraced hanging gardens. Begonias are a collector’s pride. Somewhere there is a fence to protect the garden from the menace of monkeys and tress passers; but amazingly, flower lovers grow flowers in bench formations even by the road sides.

People are hospitable and friendly.   Partying is a passion with many Dalhousites. Besides ‘Kitties’ they enjoy luncheons, cocktails, dinners and the ‘garden bar- be- cues’.   Late night gatherings are, however, not too well attended because of the inconvenient drives through the spread of the town and a scare of the wild animals. Continental, Chinese, Chambyali, Punjabi cuisine is all relished. Exotic food and novelties are well taken. Arrangements like ‘Mango party’ ‘Titter Bater’ is exclusive. The Army and the Air force often host goodwill feasts for the civilians, more so on festivals and national functions.  ‘Dalhousie club’ is another hub of social activity on special occasions. Jagratras, Navalas, Bhandars, dhams and langers are in vogue. Traditional Bhottis tastefully manage the shows. The hectic whirl of the social appointments of the season dies down with the onset of the winter when the town settles down to a quiet life with a few people, the monkeys and the snow.

Walking is a fashion here; it is also the main recreation. Excellent walks offer spectacular snow of the whole Dhauladhar range, which can be best seen after the mist clears with a spell of rain. Walking through a curtain of thick leaves and treading over the gnarled roots of grand evergreens is a different pleasure. Perhaps there is no better relaxation therapy than sitting on a protruded cliff by the side of a pathway. Dog lovers walk with their German shepherds and Labradors, keeping pace.

Pony rides are available for those who like fast trots around the hills. Many a visitor rely more on cars than walking. 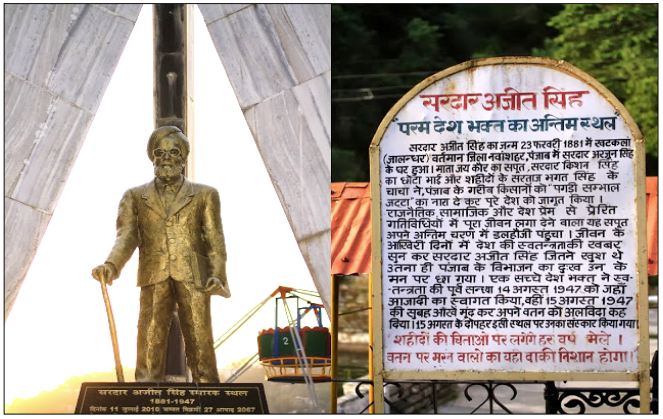 While, Cricket enthusiasts organize friendly matches and even play by the roadside, ‘Saheed Ajit Singh Memorial’ Hockey tournaments are played rarely. A squash court in the club premises is well utilised. Apart from a nine-hole Golf course at – Khajjiar, Kamla Nehru park at Bakrota provides an improvised ‘putting’ and ‘chipping’ range. In winters, one could venture in to skiing and sledging down the snowy hills, with a special permission of the Air force. There is a network of pool, billiards and table tennis tables and the gyms. Keen bridge and rummy players gather at homes by rotation, but rarely in the club. Anglers have the fishing spots, not far away. Masons are proud of their ancient ‘Free Masonry Lodge.’ Incidentally a very old ‘Rotary Club of Dalhousie’ is not functioning at present. Many NGOs are doing well for the people and the place. People share their views in the seminars and their artifacts for the historical exhibitions.

The mainstay is the Education and Tourism that has of late revived the sagging economy of the town. There are the schools of high standards. Bright faculty, adorned by the Harvard alumni, has heightened the status of this ancient education center of the North. Some excellent hotels, many of which have been converted from farmer residences, the classic restaurants and the banquet halls, add to the glamour of the resort. Dhabas serve a fresh and tasty food. Modest beginnings and years of struggle have brought ultimate success.

With the increase of demand for the flats and apartments, the ‘real estate’ and the creativity of the builders has given another flip to the economy; though the carving of the tiny plots out of the big estates has also given rise to the conflicts of the ‘right of way’. People also apprehend that the slopes made of loose soils may crumble down under heavy pressures, that is why there is break away from the trends of building high rises, and a stress in instead on the use of local materials.

Agriculture, dairy farming and cottage industry contribute their own bit to the town’s economy. Shawls and hand crafted, custom shoes are sold like hotcakes. There are neat and clean classic mini shops, besides big departmental stores. Local traders from the vicinity sell vegetables, fruits and their goods. The town was, once up on a time, the nucleus of trade for the region, when goatskins of honey from Churah used to be bartered with salt in Sadar Bazaar, tells Sh. Bishan Dass, a senior citizen.

The pace of life helps one map out the future. With an ample of leisure time at hand, some people laze around, sleeping and daydreaming; meeting friends, chatting and creating news through the grapevine. Perhaps, the town has the densest network of the mobiles for its population.  Almost everybody knows everybody and the mail reaches one just on name like in a village. Besides people’s collections of books and music at homes, there are the libraries and the cyber cafes. One has the company of old people and much younger, bursting with energy and zest of life. There is a galaxy of journalists and a crowd of politicians taking fullest advantage of the well turned out democratic environment of the place.

Rabinder Nath Tagore ,who wrote his first poem here, was the first to speak of culture specific modernism and used style as narrative device. Many an artist of Dalhousie has won name and fame and inspired amateurs to be driven by the continuity of imagination. We have painters, sculptors, poets and writers here. People of Dalhousie are indeed a creative society.