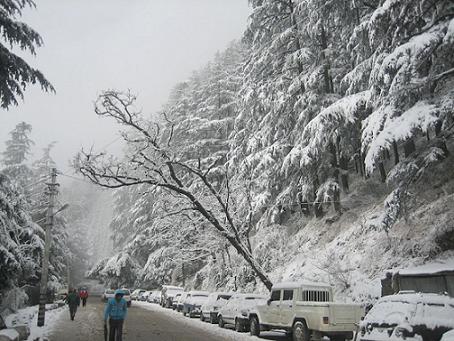 KUMARHATTI: The ongoing bad weather has proved a blessing in disguise for hotels here that were getting healthy occupancy these days. It was really a turn of fortune after low turnout of tourists on yearâ€™s end celebrations has upset hoteliersâ€™ hope badly. In fact very low presence of tourists was noticed during Christmas and New Yearâ€™s Eve thanks to the lack of snow.Observations revealed that the most of hotels in this area comprising of Barog, Jabli, Dharmapur and Kasauli failed to get good occupancy during year end this time. Usually the cent percent booking was noticed in top hotels during year end but this time lack of snow has forced tourists to remain shy to visit hills.

However the snow on last weekend and hope of more has in fact set the booking register of hotels ringing. Information gathered from some of the leading hotels here has showed that there was 25-40 percent rise in occupancy in this week till now as compare to the corresponding period of past week.

The things have started to be positive in last weekend when record number of tourists arrived to see snow, pointed out a Barog based hotelier. The rush continued as snow remained on landscapes for few days, he asserted. Moreover traffic snarl at Shimla and its near tourist resorts have worked well for us as most of Shimla bound preferred to enjoy snow here, he remarked.

The cloudy weather has again done trick in this week as tourists continued to pour in good number, said another hotelier at Dharampur. Moreover the most of booking was done by tourists from states like Maharashtra and Gujarat who usually stayed for long, he informed.

The lack of snow in past two years here had negative impact on winter tourism. Despite the fact that snow has witnessed belated this time but biting cold condition in adjacent plains forcing unscheduled holidays in schools have come beneficial for tourism here, said a local based hotelier.

Not only the hotels the road side dhabhas and eating points were also doing brisk business these days thanks to the record daily arrival of domestic tourists who reached hills for a day or so joyride.