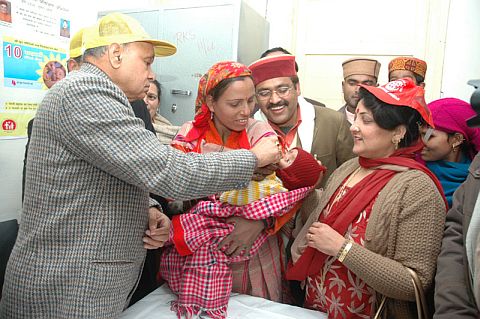 Shimla: Making an effort to eradicate polio from Himachal Pradesh, Chief Minister Prem Kumar Dhumal today admininstered Pulse Polio drops to the children in the age group of 0 to 5 years at Zonal Hospital in Kullu.

Dhumal launched the second phase of the pulse polio immunization campaign under which about 7.32 lakhs children in the age group of 0-5 are to be administered the polio drops. He urged for the cooperation from the people to avail the facility of free immunization being conducted throughout the country.

He added that the mobile have been vans pressed into service for implementation of the programmes needed to cover areas where migratory labourers were residing and regular monitoring was also required.

Heavy snowfall in the hilly regions of the state has forced the Health authorities to re-schedule the dates for campaign like in Chamba it will be held on 24th Feburary, 2008, and at Lahaul-Spiti and Kinnaur it is on 2nd March, 2008.

Health Department was to set up around 5855 polio booths and constitute 93 mobile teams, moreover, 86 transit teams were set to cover remote and inaccessible areas. Services of about 25000 officials from health, ayurveda, social justice departments, NGOs and NSS volunteers were requisitioned for the program.

A door to door survey will also be followed to ensure every child from 0-5 years received polio drops.