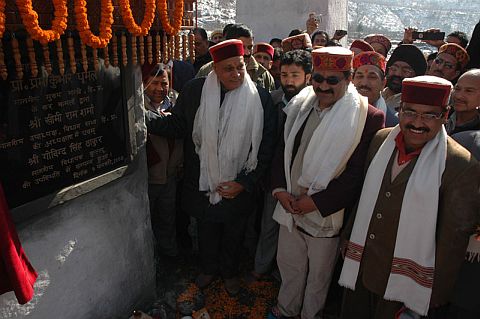 Shimla: Himachal Pradesh Chief Minister, Prof. Prem Kumar Dhumal, committed to implement the decision taken by the former Prime Minister Atal Bihari Vajpyee to make Himachal Pradesh a role model of development. He laid the foundation stone of the Govt. Degree College, Haripur near Manali estimated to be completed at a cost of Rs. 8.30 crore and SC/ST Girls Hostel estimated to cost Rs. 1.65 crore at Haripur in the left bank of the district Kullu.

As per the direction of CM the hostel building is expected to be completed within eighteen months and college building in two years.

Dhumal also said about the need of people to provide land for the connectivity of their villages with motorable roads. He said that road to Bahanu Village would also be constructed after getting the required land transferred in the name of the State Government.