Dehra Dun : The tusker that had taken five lives in the Dhabiwala region of Rishikesh was declared a rogue on Wednesday by the chief wildlife warden, Uttarakhand and directions issued that the elephant be shot, got a lease of life with the state forest department looking for other alternatives. 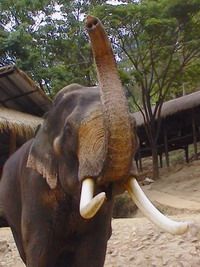 Even as a team of hunters reached Rishikesh and did a reccee of the forests in the Bhadrakali, Kharasrot and Dhalwala area with search lights to locate the declared rogue elephant, the forest department is having second thoughts and contemplating relocating the animal in another forest tract, where there is minimum human interference.

Apparently bowing to pressure by wildlife lovers and enthusiasts and the allegation that the decision to shoot the tusker had been taken without considering other alternatives like rehabilitating it another forest, the state forest department is now reconsidering ways to capture the elephant by first tranquilising it and then shifting it to another forest pocket.

Sources in the forest department, on conditions of anonymity said that the decision to declare the elephant a rogue and kill it had been taken in haste. â€œApparently with thousands of men and women led by the legislator from Narendranagar blocking the road with the body of the victim, there was tremendous pressure on the authorities, who too wanted to pacify the crowd and took the decisionâ€, they added.

They said that relocating elephants from one forest pocket to another was an established practice in Assam and Burma. They were of the opinion that an opinion could be got from experts from these places and their help also taken in shifting the tusker and studying its movements in its new home, before taking any final decision.

Sources said that it had been decided that a team of hunters and experts of the forest department would study the movement of the tusker for about a month before the move to either relocate or kill the animal would be taken. â€œThe tusker has to be identified and assured that it is the very rogue elephant or some other elephant, for identifying wild elephants in their natural habitat is time consumingâ€, they pointed out.