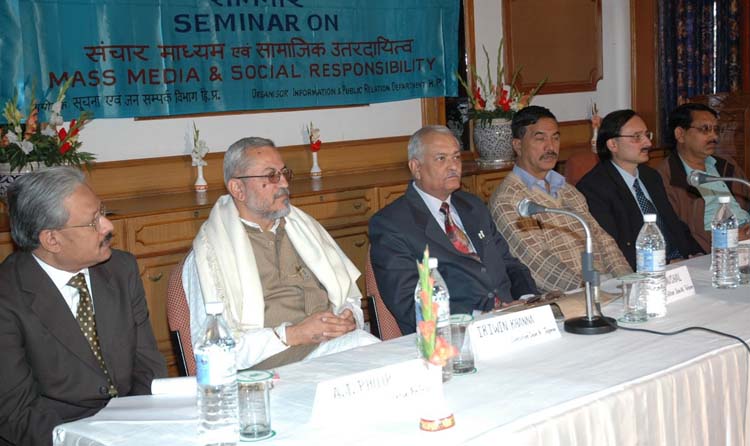 Shri T.G. Negi, Principal Secretary, Information and Public Relations said that the State Government was ensuring that information regarding various policies and programmes initiated by the present Government should be available to the media so as to publicise it in right perspective. He said that for that the State Government had issued instructions to all Deputy Commissioners to hold â€˜Press the Meet Programmeâ€™ regularly at their respective districts.

Speaking on the occasion, Shri A.J. Philips, Senior Associate Editor, The Tribune stressed the need of rural reporting and developmental journalism to bring forward the true picture of the countryside. He said that developmental journalism should focus on the needs of the poor, deprived, marginalized and should emphasise their effective participation in developmental planning. He said that this would ensure in advocating the interests of the people besides highlighting their views before the policy makers and planners. He said that Himachal Pradesh was a fast moving State and has earned distinction in various fields of development. He said that in the field of education, the State has achieved a significant achievement.

He said that Indian Press had a missionary origin as during the freedom struggle newspapers worked with social commitment and zeal for the cause of the nation. He said that The Tribune had also played a significant role during its 126 years of existence in highlighting the socio-economic problems of the people of the region. He said that The Tribune will shortly bring out two more pages exclusively devoted for the State so as to ensure better coverage to the State.

Shri Naresh Kaushal, Editor, Dainik Tribune said that the prime role of media to carry the information and he advised the journalists not to coat the news with their own views and opinions. He said that while reporting facts, self restrain was of utmost importance . He said that fearlessness, impartiality and freedom of expression were key in making a good journalist.

Shri Irwin Khanna, Editor, Uttam Hindu stressed the need for adopting ethical norms in journalism. He urged the young journalists to adopt social service and social responsibility as their motto in life. He also highlighted the contributions of great leaders like Mahatma Gandhi, Madan Mohan Malviya in making public opinion through their writings during the freedom struggle.

Shri Dinesh Malhotra, Director, Information and Public Relations welcoming the participants, said that the media scenario in India has undergone a sea change and so has the responsibility of those in the profession. He said that integration of communication with development was essential for the upliftment and betterment of the society.

Shri Krishan Bhanu, Senior Journalist and President of Shimla Press Club stressed for better coordination between the press and the government functioning.

Senior journalists from various newspapers, electronic media and officers and officials of Information and Public Relations Department participated in the function.