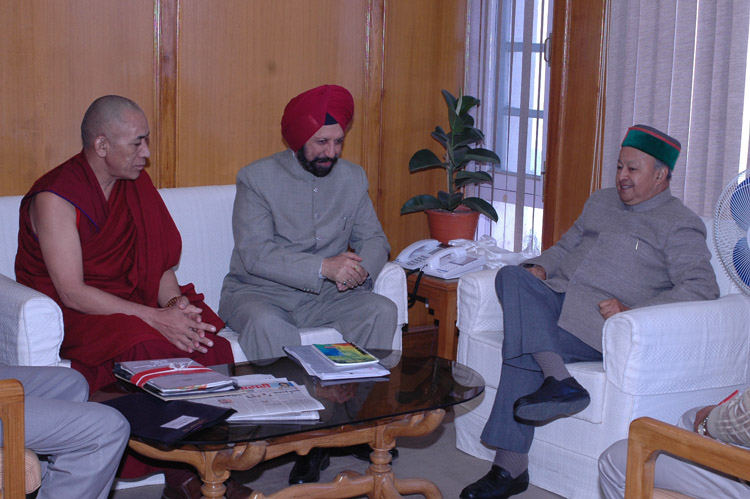 Shimla: Chief Minister, said that the State Government would be exploring the possibilities of bringing about a legislation, after examining all related aspects and in consultation with the legal experts, aimed at banning the forcible conversion of the people in the State. He was discussing the issues relating to the welfare of minorities in the State with Shri Harcharan Singh Josh and Lama Chosphel Zotpa, Members of the National Commission for Minorities, who called on him here today.

Chief Minister said that the Constitution of India provides freedom to its citizens to follow any faith or religion of their choice to uphold the secular character of the nation and it had followers of almost every religion, faith and sect followed in different countries of the world which speak of the religious freedom to the people of the country. He said that people who convert to other faiths willingly and of their own choice were free to do so but no person should be forced to follow one or the other religion by force and through unfair practices which was contrary to the Constitutional Rights of the people. He said that the country was religiously harmonious and every citizen was required to honour the secularity of the nation in right perspective. He said that the religion should not be the means of obtaining benefits and incentives.

Shri Virbhadra Singh said that Himachal Pradesh was known as the land of Gods and Godesses and people had immense faith in the devotional powers and any hindrance by any mean in performance of their devotional duties required to be checked for which the government would be initiating effective steps. He said that the State had devotees of all religions, faiths and sects coexisting harmoniously. He said that the peace and communal harmony of the State would not be permitted to be disturbed at any cost and the State shall continue to remain the land of Gods and Godesses by extending full protection to the religious freedom of the people.

Chief Minister reiterated the resolve of his Government to safeguard the interests of the minorities and provide them equal opportunities to progress and prosper. He said that his Government had constituted the Minorities and Other Backward Classes Development and Finance Corporations which were helping the minorities and deserving sections of the society liberal financial assistance to start their self-employment avocations besides organizing training and awareness camps for their benefit from time to time.

Shri Virbhadra Singh said that Himachal Pradesh was the perfect example of religious and communal harmony and people of every faith had regard for the faith of other people which had made the state most peaceful. He said that however strict vigilance was being kept over the people attempting to disturb the religious harmony and peace of the state and strict action taken against all the anti-social elements.

Shri Harcharan Singh and Lama Zotpa thanked the Chief Minister for the best policies and programmes aimed at safeguarding the interests and upliftment of the minorities in the state and hoped that the other states would get inspiration from the State in this regard.