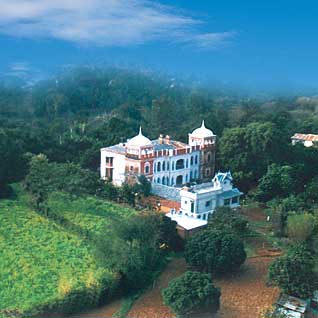 Reflecting the ambience of the Anglo-Indian traditions, this splendid country manor was built by Justice Sir Jai Lal at the turn of the century.

Spread over 100 acres of orchards, the hotel offers a magnificent view of snow-capped mountain peaks. Located near the ornamental village tank, and approached by a cobbled street, this courtyard haven captures the mood of its original bygone era.

Pragpur is also the first and only notified heritage village in India.

The Kangra Valley, where Heritage Village Pragpur is located is panoramic and replete with history. It is the home of the famous Kangra school of painting and probably the world’s – most certainly India’s – oldest ruling lineage comes from here. The area of Pragpur was part of the Principality of Jaswan whose chief, in the late 16th or early 17th Century charged a band of learned men, led by a Kuthiala Sood, to find a suitable place to commemorate Princess ‘Prag’ of his royal lineage.

The Soods are a special community laying claim to being Agnivanshis – born of a sacred fire – with references to them in ancient Hindu texts like the Rig Veda. At the time when Simla was the summer capital of the British Raj the Soods from around Pragpur owned more than half of it, and still continues to be the dominant community.

The site chosen for Pragpur lies in the shade of the Dhauladhar mountains – the white ranges – and is said to be so located as to receive the astral benefic influence of prayers that have been offered for thousands of years at three nearby ancient SHAKTI (Primordial Energy) Temples of Bajreswari (Kangra), Jwalamukhi and Chintpurni.

By a notification dated 9thDecember 1997 the State Government has classified Pragpur as a “Heritage Zone.”
Village Tourism